This is for you Sandi.  My friend Sandi asked me to blog about sushi.  No problem!  Though I can only imagine that talking about how wonderful the sushi is here can only be torture for someone who is not here. 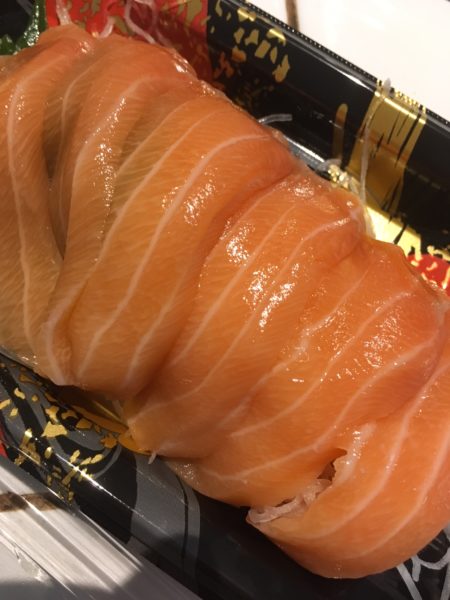 I plan on getting sick of sushi.  It’s only day 8 though so I’m nowhere near that goal.  I stopped eating sushi about two weeks before I came to Japan, opting to indulge in things I’d miss like burgers and pizza before I’d no longer have those choices.  I can’t say I’ve eaten raw fish every day, but it’s close!  I haven’t gotten too adventurous, but I did discover something I cannot tolerate.  Stay tuned!

When I got into Tokyo I found a hole in the wall place in an alley by my hotel.  There was no English so I just pointed at what I wanted.  It was essentially a bowl of rice with raw salmon on top.  Salmon is my favorite!  I took it to my hotel room, had one bite, and went weak in the knees (though that could also have been due to the 26 hours of straight travel I had just endured).  It was heaven.  Heaven cost me about $5.

Next, on a rainy excursion into Shinjuku for art supplies, I ducked into a tiny rotating sushi bar.  It wasn’t really in the plan but I was walking home and it was pouring rain so I figured I’d eat.  Twist my arm.  Again, I wasn’t too adventurous.  I got my customary salmon and tuna but this unusual white sushi kept taunting me.  The belt on the bar was very short so it passed by my face several times.  We got into this rhythm so that whenever I looked up the white sushi was there.  We started flirting.  “Oh my gosh that cute sushi is passing by again!  Preen your hair and look disinterested,” my brain said, trained by countless hours of watching my cat’s disinterest in each other, their current expensive toy, and me.  The sushi disappeared around the corner.  “OH!  Here it comes again!  Tilt your head slightly down, glance up, and look away and giggle,” my brain said, trained by countless hours of Japanese films about Geisha.  “Ok good.  Next time say hello.”  Oh my gosh!  But it’s Japanese sushi!  Should I say hello in English or Japanese?  What time of day is it?!  Should I say, “Konichiwa” or is there something else I can say that’s more flirty?  How do you say, “I would like to put you in my mouth, take you home with me, and see you transformed in the morning” in Japanese?  Let me get my translator.  I settled for “Hello” and was so laser focused on the game that I didn’t notice that the people in the bar had grown oddly quiet.  A Japanese person won’t stare at you when you’re being weird.  They are very polite about eye contact.  No, they were staring very intently at their own food.  Time to grab the damn plate of sushi.  Here.  Look at it. 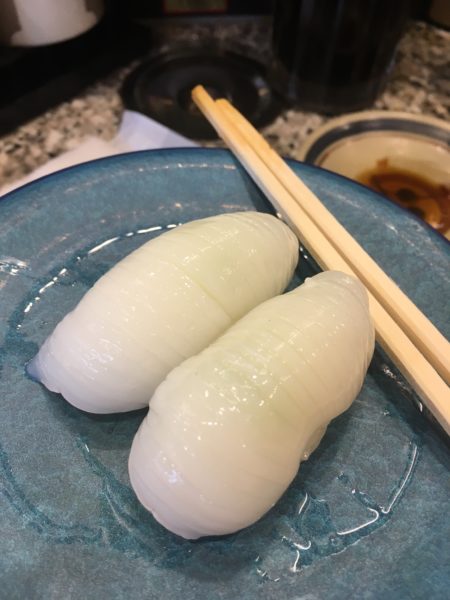 Now usually I use my chopsticks as scissors to cut my sushi or sashimi in half.  I don’t like putting that much sushi in my mouth at once.  I always chastise Ryder when I hand him an expensive truffle and he casually pops the WHOLE THING in his mouth.  That causes my own mouth to hang open in disbelief.  I prefer to take many smaller bites so I can savor the experience over and over, rather than fill my mouth so full of food that I can barely operate my jaw.  So, I did as the Japanese do, dipped my sushi in wasabi and soy sauce, and popped the whole thing in.  I chewed.  I began to feel unsettled.  I chewed more.  No.  Nope.  Do not like.  Abort.  Abort.  But I am in Japan.  Were I to spit the sushi out the owner of the bar might ask the sushi chef to stick a sword in his own stomach, or worse, fire him.  I choked it down.  I did not eat the second piece, instead choosing to dishonor my family by leaving it uneaten.  Sorry Ryder.  Sorry Mom and Dad.  I got out of there for $4.50. 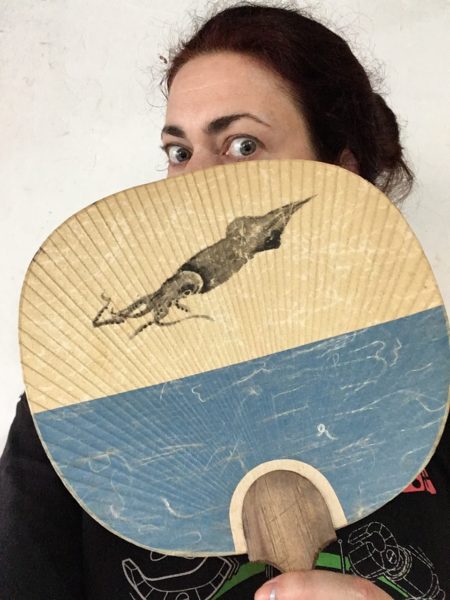 But Sue Anne!  What kind of sushi was it?  Squid.  And I eat squid!  I’ll eat the crap out of calamari or even a cooked squid steak at a Japanese restaurant.  But the texture is so different when it’s raw… dry heave, dry heave…

In Onishi, the small town of 5000 where I’m attending the residency, I have two more sushi experiences available.  One, a sushi restaurant, and the other a supermarket.  Let’s start with the supermarket.  OH. MAH. GAH.  This will keep me walking at least 3k a day to and from the grocery store.  LOOK AT IT.  (The featured image of this post is a closeup of the salmon.) 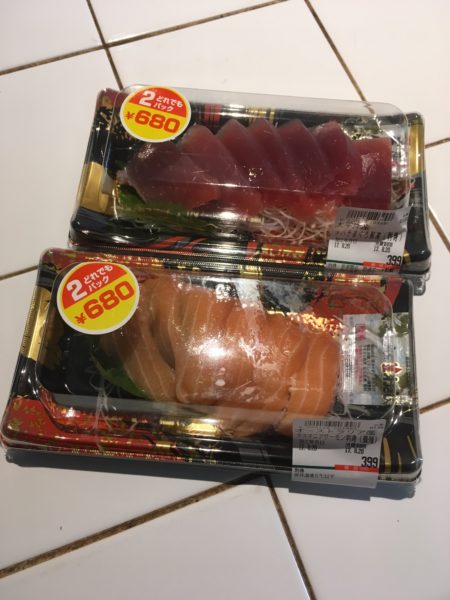 You see that 2/680 there?  I got both of those for essentially $6.80.  Believe me when I say they are orgasmic.  I’ve eaten them both already, the tuna and the salmon.  Sweet Jesus.

Lastly, I excitedly entered a very traditional building that is the local sushi restaurant.  Very little English there but they do have an English menu with pictures.  I ordered a chirashi bowl with a bunch of goodies.  This is a chirashi bowl: 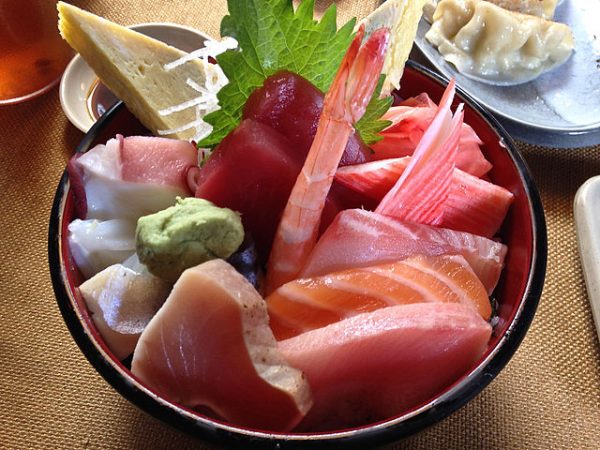 There was an offer to substitute one fish for something we didn’t like or want.  Tuna, yes.  Salmon, BRING IT.  Octopus, yeah I’ll eat that.  Squid?  I froze.  1000’s of synapses regurgitated 1000’s of neurons through an electric spiderweb of brain goo.  Adorable Japanese people awaited my reply, which was a hesitant “ok.”  I know.  I know.  But I thought maybe I got a bad batch at the first place.  Nope.  Just as vile.  Let me try to describe it.  The flavor is not bad, it’s the texture that sends my body into fight or flight.  Ok so… dry heave, dry heave…  it’s springy and kind of tough, but on the surface it’s got it’s own buttery ecosystem of slime.  It’s… dry heave, dry heave… not something I’m going to put into my body again.  Ever.  I am more likely to like a student’s anime sketches than I am to eat squid sushi again.  The problem is, now I have this second piece mocking me in my bowl.  It’s considered a bit rude not to finish your meal here in Japan but I just couldn’t do it.  Sorry Ryder.  Sorry Mom and Dad.