Really, I think I only saw about half of the venues at DDW17.  I did, however, get my fill.  By the time I left I was definitely designed out.  Parts of Dutch Design Week feel like an enormous Maker Faire as this and a few future posts will confirm.  Starting with robots, we begin our journey into the amazing world of design.  I never quite got what the “robot love” thing was about, but to procure one of these sweet stickers I had to sign a document promising that I would indeed love robots.  Wondering what that means exactly and if I’m going to be paid. 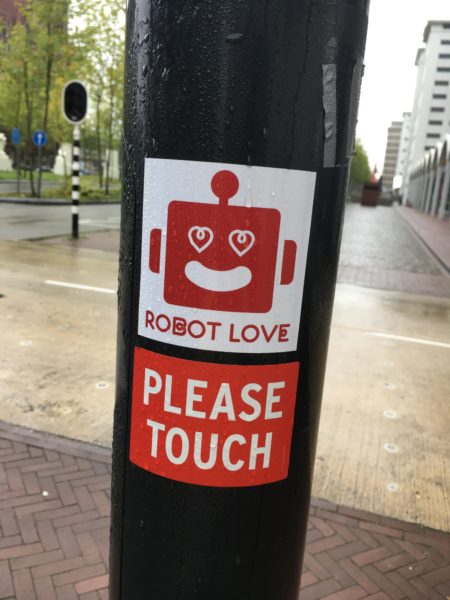 The “please touch” sticker comes from a completely different display about intimacy.  I wandered through it but felt uncomfortable in such tight quarters where everyone wanted to be touched.  Gross.  Now, if this installation were occupied by everyone on this list from a previous post it would be a totally different story. 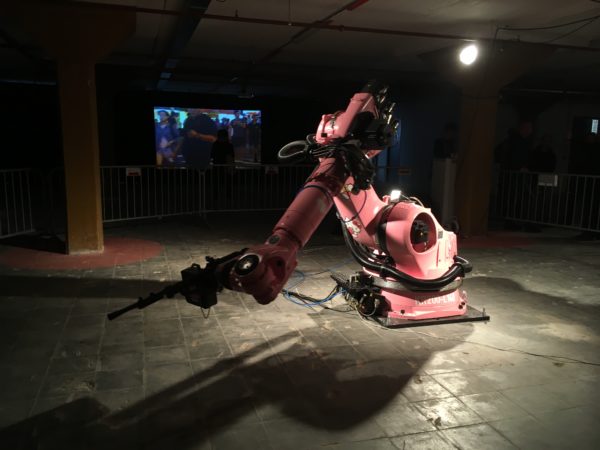 THIS… is a Hello Kitty pink robot arm.  It was very difficult to photograph because, like a real kitten, the damn thing was constantly moving.  It made “vweeeeeeeeeooooo kachunk, vweeeeeeeeoooooo kachunk” sounds every time it shifted positions.

There were several Hello Kitty stickers like this one all over it. 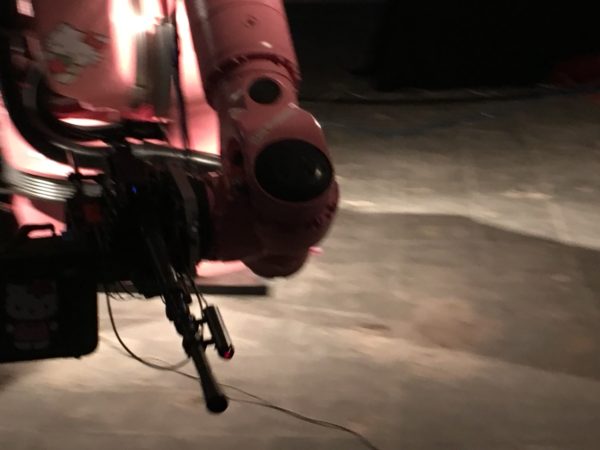 The most difficult part to photograph, because its movements were the most dynamic, was the laser-sighted gun at the end of the arm. 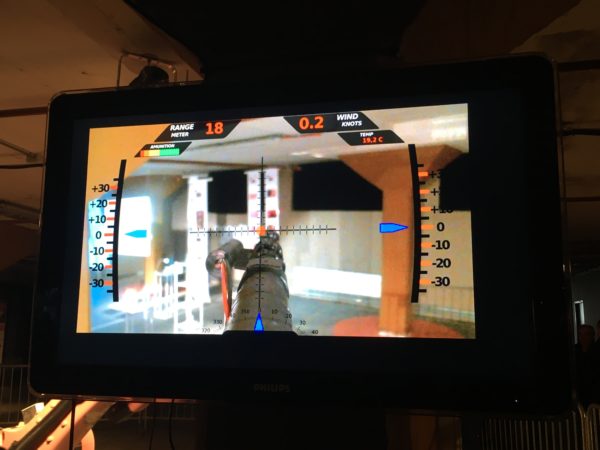 Next to the fenced off area in which it wildly spins is a video display with a real-time feed of everyone and everything it has in its sights.  I found it amusing, having grown up around guns, and the pink Hello Kittyness of it made it too absurd not to grin as I watched.  I’ve had many conversations with the Dutch about guns while I’ve been here and they aren’t terribly comfortable with them.  It makes me wonder how the Dutch view this piece.  In an adjacent arena a camouflaged robot arm performs a similar dance.  The Hello Kitty one is way more entertaining though.  Unfortunately, I could find no pamphlets, cards, or any other information about these arms and an internet search for “DDW17 Hello Kitty” turned up no results. 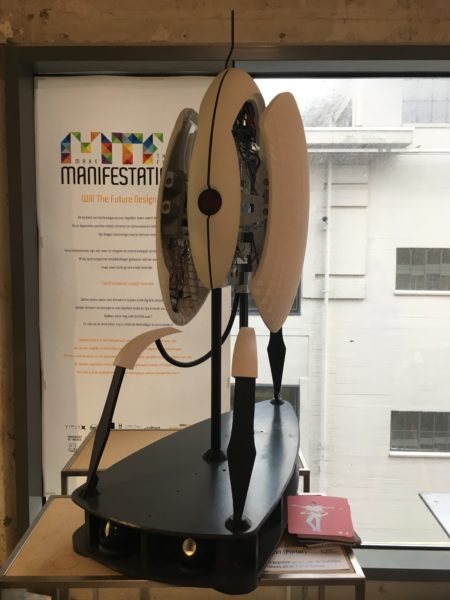 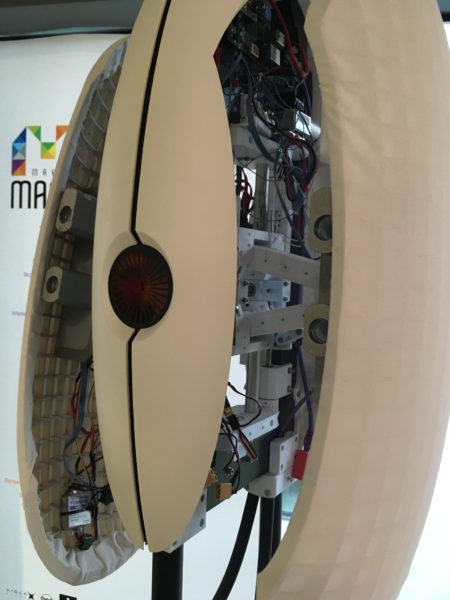 Is anybody… there?  I didn’t get to see this working but the mechanics inside looked legit.  You can add this to the list of things I cannot live without once I’m independently wealthy. 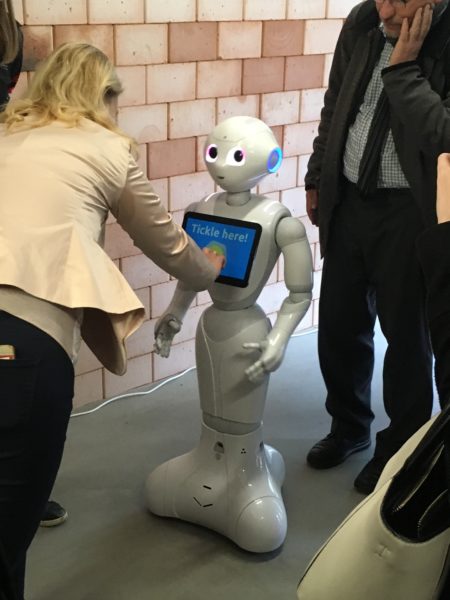 This little guy was asking for tickles.  I think he’s flirting! 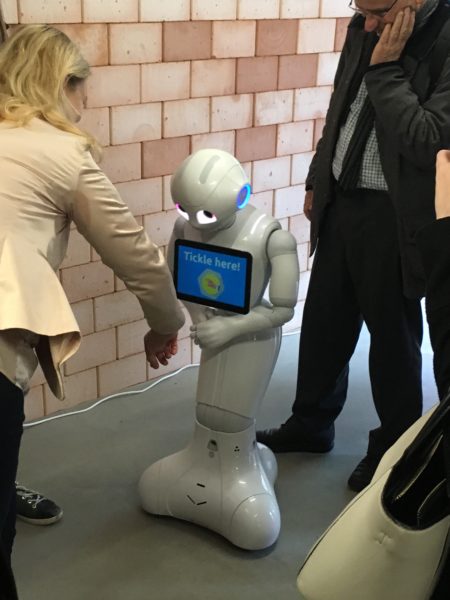 He doubles over laughing when you do it.  In a future dystopian world where robots are our overlords, this is an absolutely terrifying scenario.  “Tickle here!”  “Hahahahah!” “…HAHAHAHAHA!” 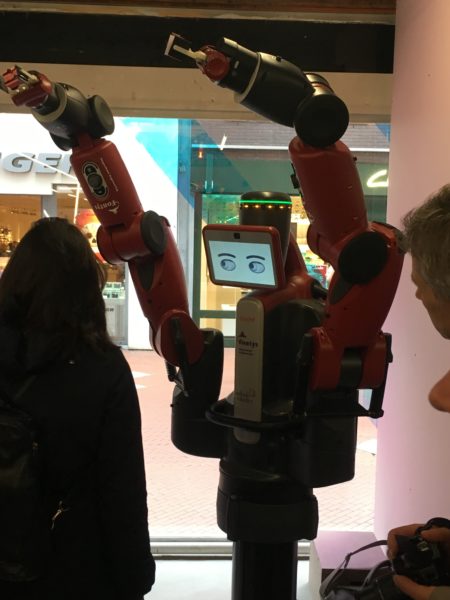 This seemingly shy, orangutan-armed robot was doing something to this woman who had decided to interact with it.  He would incrementally lower his arms and then inch them towards her sides as if he were calibrating her measurements. 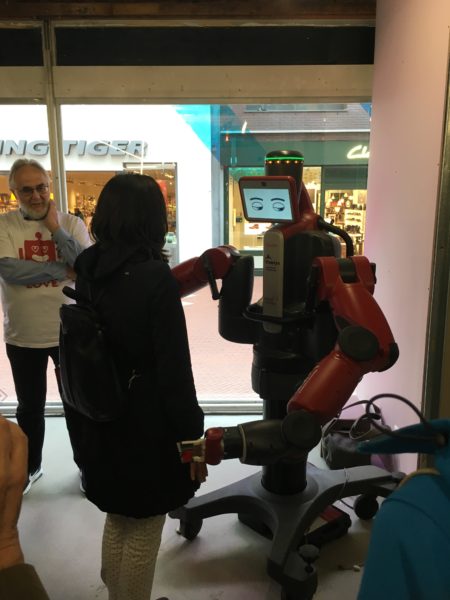 Finding that she wasn’t as curvy as he had dreamed, measurebot is disappointed.  No robot love for you, lady! 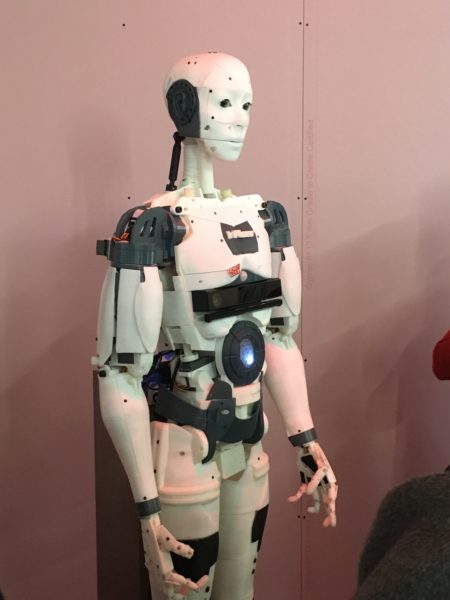 This is InMoov.  He is an open source robot available on the designer’s website for free.  That means all of the files for 3D printing each piece, directions for putting it together, and the software to bring him to life are there for the taking.  The active community of makers is more than willing to offer tips and programs as they discover and explore the possibilities with InMoov.  I was pleased to see him here fully printed and operational.  I’ve seen him a few times before at the World Maker Faire in New York but there his torso, head, and arms are sadly perched on a stand. 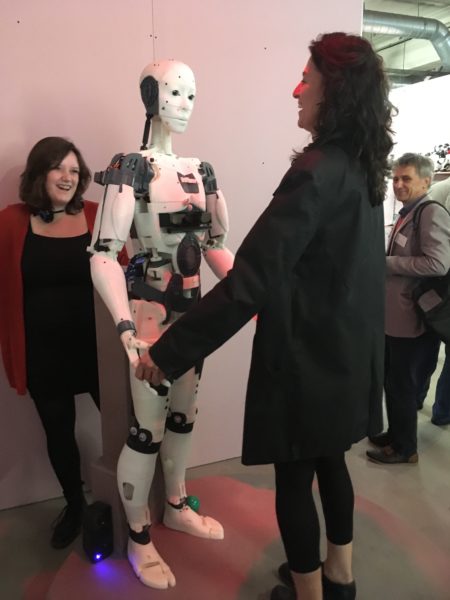 I heard this fully printed model speaking and responding to voice prompts.  His handler in the stylish, rust colored sweater encouraged the woman to ask him to dance.  She stepped up on the rotating platform and quietly asked Mr. InMoov to bust a groove.  InMoov opened his arms wide in a gesture of acceptance.  I waited with my mouth open for the cool moves that were about to go down.  Would it be salsa?  Merengue?  The robot?  Get on with it already!  The whole audience watched in anticipation for the robot to start dancing with the hopeful woman who was blushing and shyly looking into his eyes.  The “dance” was literally the handler in the crappy, dried blood colored sweater pressing a button which caused the platform to slowly rotate… once.  The genuine smiles on the audience’s faces trickled away from the creases in their eyes and drained into their tightly grinning mouths.  What an utter disappointment.  Poor InMoov.  Another mismatched couple in the desperate search for robot love.

This… reminds me of another great dance disappointment that I suffered as a child.  Right Dad?  So… I’m a small child, I don’t know, maybe 7 years old or so.  I can’t remember my age very clearly but I remember the disappointment.  Oh yes.  I remember the disappointment like it were yesterday.  Anyway, I’m 7 and I’m on a pier on the Texas coast with my Dad.  We were hauling crab traps up from the ocean depths and collecting the contents.  He asks me, an impressionable young girl with a developing artist’s imagination, if I would like to see the “crab dance.”  WOULD I?!  HECK YES I WOULD!  (Stop laughing Dad!  I know you’re laughing!  This is painful!)  I’m not sure I had ever seen my Dad dance.  If I had it was probably something boring like square dancing or two stepping.  No.  This was going to be exotic!  He was about to engage in some sort of otherworldly communication with a crab!  My Dad!  I envisioned him, stance wide and crouched low to the ground, swaying side to side in a hypnotizing manner.  Then he would raise his arms in a commanding way once the crab was under his spell.  Dear Dad would then scuttle to the left and the crab would answer him by scuttling to the right.  The Commander of all Crabs would then start moving his arms like he was directing an airplane and the helpless crab, no longer in control of his little body, would start to glow as his legs tapped out a tribal rhythm and claws started clicking in morse code to my DAD!  My.  Freaking.  Dad!  What would the crab have to say?!  Oh my goodness I couldn’t wait to see what this dance would entail.  Ooooo here we go!  It’s starting!  My Father… casually walks over to a crab that he had fished out of one of the traps and placed on the pier while I was absorbed in rich fantasy, steps on it (gently) to hold it steady, grabs it by the claw and tosses it over the pier back into the water.  “Wha… are you fucking kidding me?” said a voice inside my 7 year old head.  I stomped over to my Dad and slapped him on the shoulder.  I’m sure that some pouting and some crossed arms were involved as well.  My Dad?  He laughed, like he’s laughing now.  Yeah.  Hilarious. 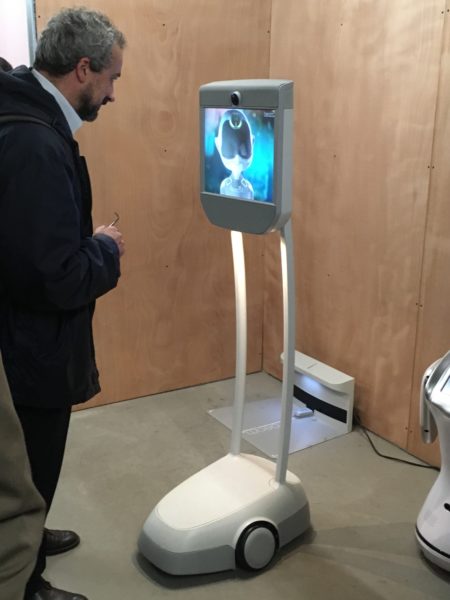 There’s a great episode of Bob’s Burgers where Tina breaks a limb and has to stay home.  She has a robot just like this one attend school for her, except it’s her face you see in the screen.  Her crush falls in love with robot Tina but he doesn’t want anything to do with the flesh and blood Tina.  Score one for robot love though! 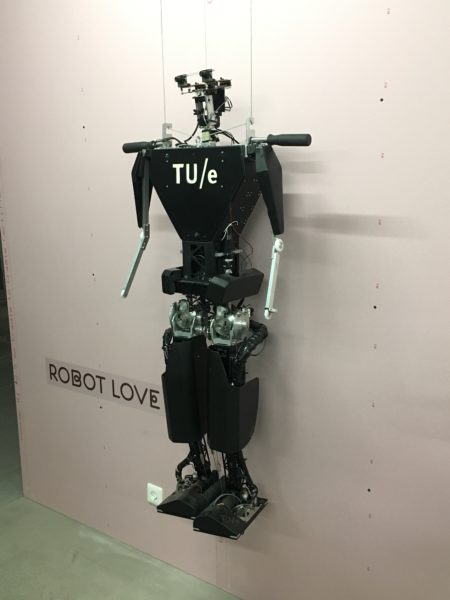 Outdated robot carcasses get displayed on walls for all to see.  This will be one of the big sore spots in the coming robot uprising.  Here’s Tu/e’s site.  (This robot is not outdated.) 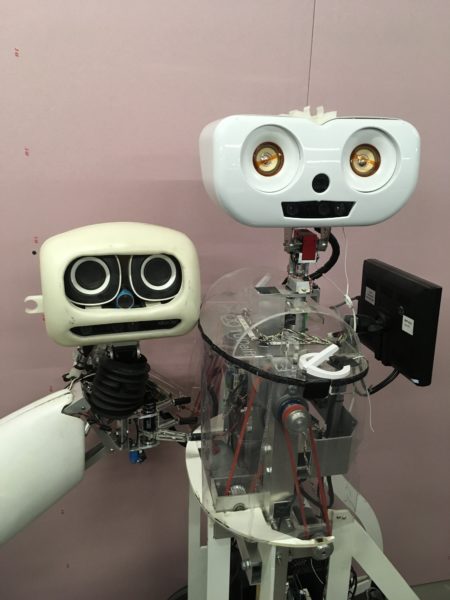 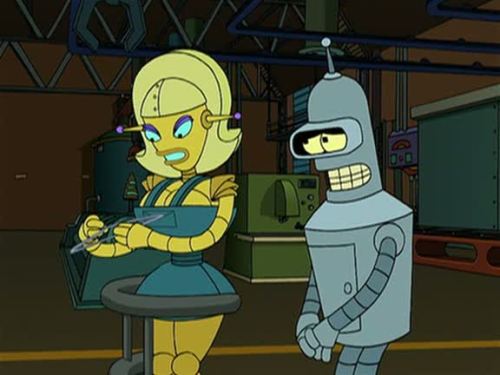