Ok first, let me get this out of the way…

OH MAH GAH!  I SAW THE THIRD OF MAY IN PERSON!

OH MAH GAH!  I SAW THE BLACK PAINTINGS IN PERSON!

OH MAH GAH!  I SAW THE NUDE AND CLOTHED MAYAS IN PERSON!

OH MAH GAH!  I SAW THE GARDEN OF EARTHLY DELIGHTS IN PERSON!

As a person who is often guilty of hyperbole, I’ve hyperboled myself into a corner with the title of my last post.  The true art attack took place at the Prado and Reina Sofia the following day.

I waited in line for about 30 minutes to get into the museum and while I read that many people said they needed a whole day to see everything there… (One moment.  Hey uh all you art history people?  Yeah, you probably have pressing engagements to attend to.  You should go do something else other than read my boring ol’ blog about a subject you know far more about than I do.  It’s ok.  Go on.  Shoo.)  …I got through there in about an hour and 15 minutes.  I had a map and I strategically circled all of the pieces that I wanted to see along with their locations.  It was a surgical strike.  Initially I gave a little time to each piece I saw in the first room (of I don’t know how many rooms, 300?) but then I started to see a pattern: These were all paintings of wealthy people I didn’t know, or their food (like paying an artist to instagram your lunch) or Jesus, or flying babies.  Mind you, they were all amazingly well done but it all looks the saaaaaaame-uh!  It’s like having a teen girl that you’ve never met before show you 1000’s of selfies on her phone.  “Oh like, this one’s so like, cute!  Oh my God no, this one!  No!  Like, this one is like, my favorite!”  HEY!  What did I tell you art history people?!  Go get a coffee at a coffee shop with no internet!  Off you go!

Things I really appreciated in this museum experience:

As for Velazquez, I see why “he” rises to the top of historic Spanish painters.  (I put quotations around he because I discovered he had assistants doing his bidding.)  Las Meninas did have some crowds around it so I didn’t get real close.  What I appreciate about this piece is how different the composition is in comparison to the majority of the paintings in this museum.

Here’s a different painting of his that blew me away: 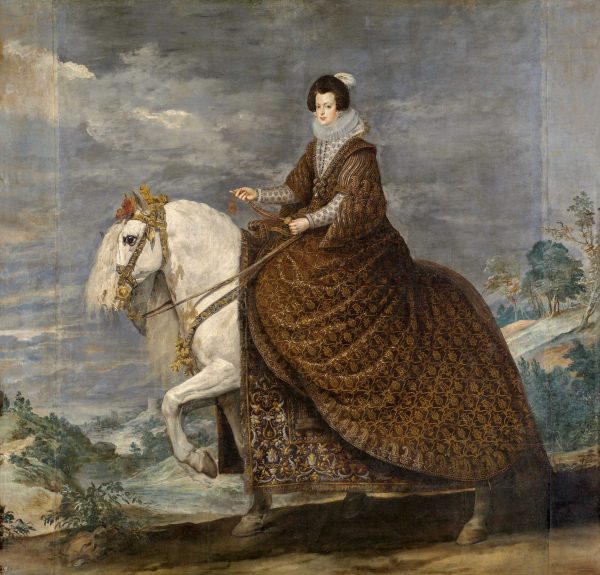 It was here that I learned that Velazquez might casually swing by the studio on his way to have tapas and beer and paint the face of the horse and then torture his assistants with the task of painting the fabric.  “Adios pendejos!” …is something he may or may not have said with each arm wrapped around a couple of senoritas as he kicked open the door to leave.  The fabric was exquisite.  This piece measures about 10×10 feet so you have to stand back to get a good view of the whole thing and then move up close to see each shiny painted embroidered thread.  You can get a closer look here.

Here’s another in a similar vein.  (Oh yeah – lots of paintings of people on horses. Sigh.)

What I loved about this piece was the variety of brush strokes evident in a single painting.  (For a closer look go here.)  Of course, this could have something to do with the hands of the assistant painters not being physically attached to Velazquez’s body therefore allowing each persons’ individual style to come through…  But I thought it was cool to see the shiny metal of the armor done with no evidence of a brush stroke while the horse’s mane was allowed to be painterly.

Let’s contrast these solemn horse riding scenes with a little drama.  There was this guy Tereus.  He was married to a woman named Procne and they had a little boy, Itys.  Tereus lusted after Procne’s sister, Philomela, so he raped her, cut her tongue out so she couldn’t tell anyone, and hid her away.  She managed to secretly get the word to her sister to tell her what happened.  Procne decides to kill Itys in revenge and the scene below shows the moment when… 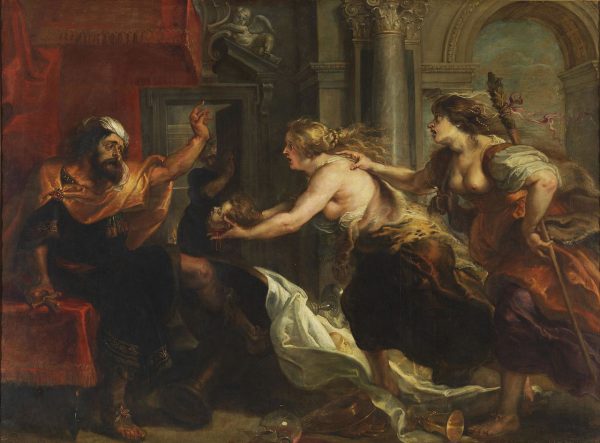 …Procne reveals that the meal he ate only moments ago was actually his son.  Just when Tereus was about to kill both women the gods intervened and turned them all into birds.  The end.  Read all about it here.

Soooooo… I have some questions.  Why are the boobs out?  Were they to distract the cannibal rapist?  Does Procne not know that some of the best delicacies come from the head?  Get your shit together Procne!  How did she get a chef to agree to cook a small child?  Was it the boobs?  Did Procne understand that Itys was also her son?  Did he throw one too many fits in the public market and was she just looking for an excuse to serve him up for dinner?  Why didn’t the gods intervene earlier?  Couldn’t they all have simply been out for a friendly family stroll and then *poof* birds?  Do the gods like butter on their popcorn?  Sigh.  Gods.

Here’s my brief formal analysis of the work:  In addition to an exciting story there’s an exciting composition.  Diagonal lines accentuate the action in the image and we see a lot of forward motion coming from the advancing topless women.  The painting is well balanced by reds on either side and high contrast in the middle accentuates the focal point.  Do I need to tell you what the focal point is?  Look at how the white fabric on the floor gracefully tapers into a point which aims at the head.  Procne’s arms serve a similar compositional function in bringing our eyes to the boy’s face.  Dark negative space bends around the focal point, framing the lighter yet grotesque shape.  The last reward in the vengeful tale is in the reddened eyes of Tereus.  Rubens truly captured the emotion in the King’s face.  I don’t really think he nailed the correct emotion for either of the women though.  I expected more rage.

Well!  I think my job is done for the day!  And that’s just the Prado!  I’ll try to cover the highlights of the Reina Sofia in the next post!

PS. Not Eagles as in the football team.  I’ve never cared for football.  Oh hey!  Have you subscribed yet?  Never miss a post!