I sure am glad syphilis isn’t as much of a problem as it once was, as least in developed countries. There was time before antibiotics when syphilis was quite terrifying. I’ve seen images of tertiary syphilis and lost some sleep over it. It makes people lumpy. For example, here the artist has tastelessly drawn the girl all misshapen and deformed in orange silhouette. 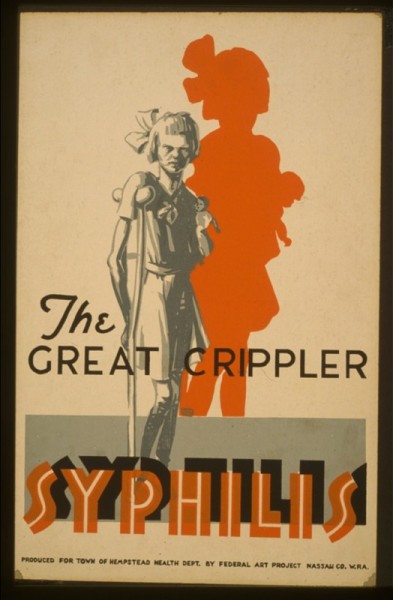 Oh, whew. It’s just the shadow of a bow and a dolly. But holy shit, you saw it right? Look at how mean that girl is. She’s taking her anger out on you, reader, for not caring more about syphilis. Speaking of the “think of the children” angle, how about this one? 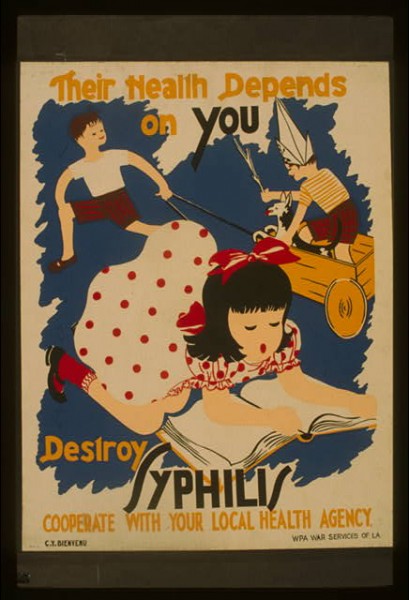 That little girl’s dress has already contracted syphilis and it’s spread to her mouth. She can’t even support the weight of her body. I must admit that my heart is warmed by the boy with one foot pulling the wagon for the feeble-minded boy missing both feet. They’re even keeping a positive attitude while their crippled sister closes her eyes into the pain. Moving on to a safer subject… 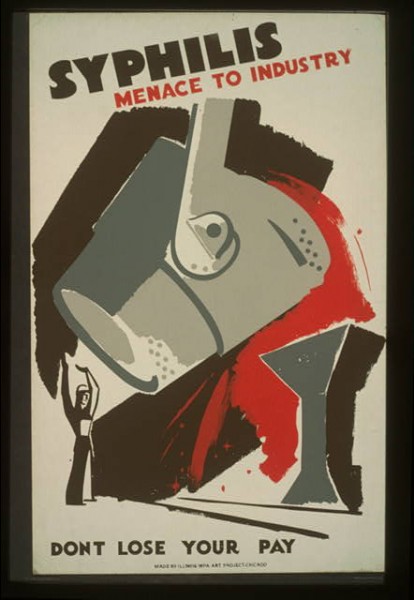 I get that you don’t want to make posters with puss-filled, rotting body parts on it. For an artist, a poster about preventing syphilis is an undeniable challenge, but these posters are just confusing. See, to me it looks like syphilis has given superpowers to a guy wearing ninja pants. He’s turned a thimble into a giant container of lava to melt the chunky and slow moving, yet still immensely terrifying invading army of martini glasses. He’s making it hover… with his mind. You really not gonna pay this guy? 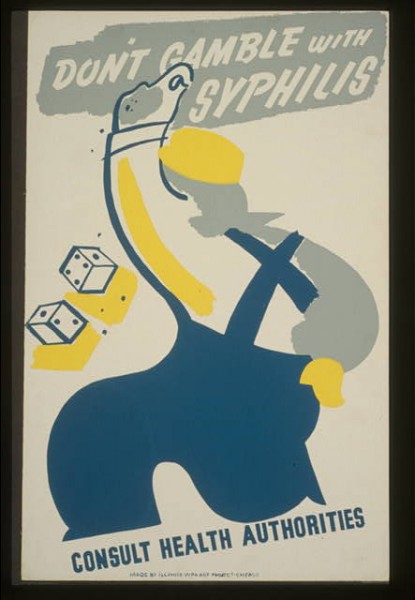 No, no, he’s gambling with “dice.” This poor man has lost his face because of a sexually transmitted virus and gambling is the only act in which he finds solace. You want to take that away from him? I’ll see your twenty and raise you syphilis. No, thanks. Perhaps the artist should have a guy sitting down at a table gambling against a group of mean-looking, coiled, stringy worms wearing dark glasses. 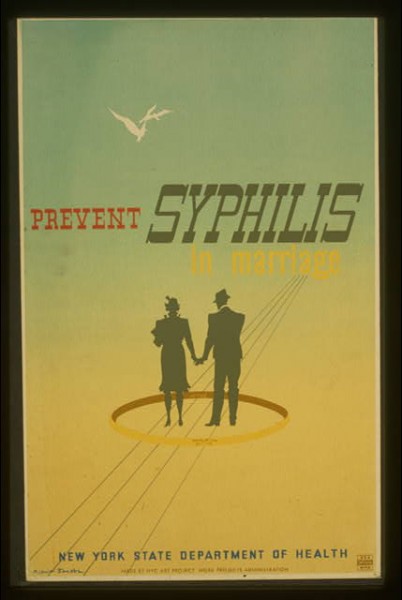 Man – those fine streams of syphilis pouring out of a random spot in the sky nearly got this couple. Fortunately they surrounded themselves with their golden ring of matrimony. Plus 5 to health and vigor. Which leads me to the unmarried population… 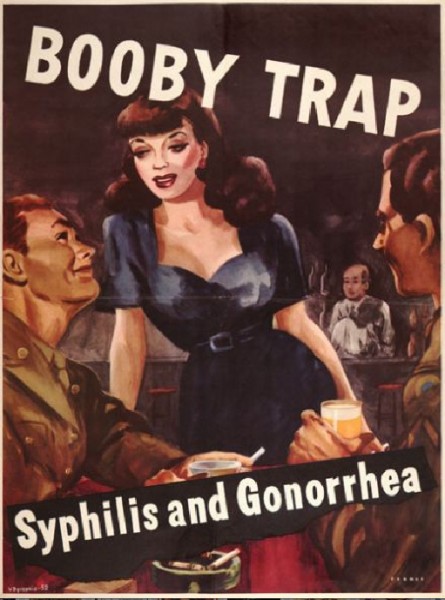 Not the best names for a pair of boobs. They’re neither sexy nor confidence-instilling in these dark, diseased times. Maybe something more like, “Turner and Hooch,” or “Simon and Garfunkel,” “Rosencrantz and Guildenstern,” “Batman and Robin,” or the names I’ve simply chosen for mine, “Johnson and Johnson.”

Damn straight this one’s a bag of trouble. She was crossing the street, determined to give that random guy on the corner some form of venereal disease, when she was hit by a car. You can see how swollen and bruised her face is. There’s even a piece of debris stuck to her face where her eyebrow should be. They outlined her in chalk and were commenting on how amazing it was that she managed to hold on to her cigarette when they realized her body had been reanimated by syphilis! This picture was taken by the coroner right before she bit him in the face. 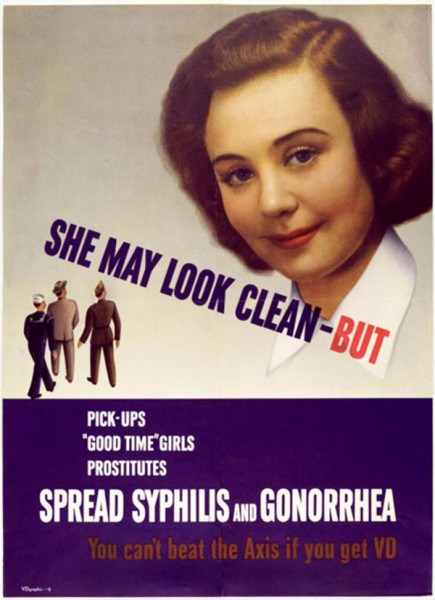 I guess the artist was playing off of that naughty nurse fetish. Hey, why is it always the woman who’s blamed for spreading disease and filth anyway? Let’s even the score a little. 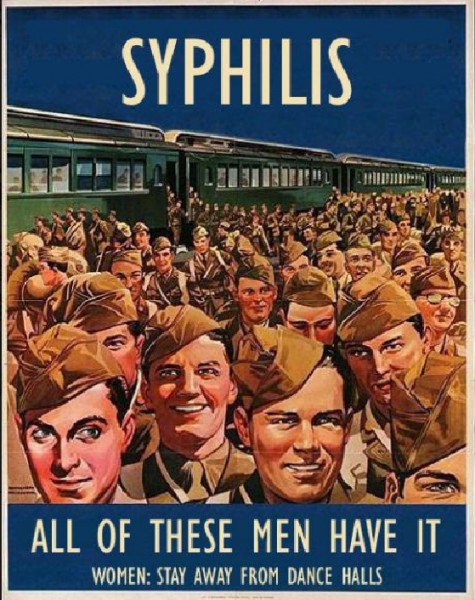 Toot, toot! The syphilis express is detraining! All of these men look happy and healthy, but look again. That second guy on the bottom left looks maniacally eager to spread syphilis with his mouth and penis. Apparently it’s only the dance halls where women are in danger of contracting syphilis. You can straight up have sex on a table at a restaurant or bar. Or, why not copulate on the stage in a theatre? There’s no risk of syphilis there! What is it specifically about dance halls? Are you telling me that the “jitterbug” was so named because men performed it to shake all of their syphilis off onto nearby women? These posters leave me with more questions than answers.

Do all of those men really have it? Our children? All women at bars? Has syphilis really invaded our workplaces and homes? Are we no longer safe at the casinos? Our casinos?!? Will we ever enjoy horizontal refreshment again? The answer is yes! Antibiotics made the sexual revolution of the 60’s possible. Many of you wouldn’t be here today without antibiotics. But now we’ve made MRSA the new terrifying disease. (Assignment: submit war-era style posters about preventing MRSA. I expect to see evil anthropomorphized hospital buildings, demonic nurses, and zombie doctors…)

These days posters about VD just ruin the life of one really, really ridiculously good-looking model who posed for a head shot that was placed in a pool of stock images.  Hey – don’t shed a tear for the diseased model – they knew the risks and a crisp, virus-free twenty dollar bill was tucked neatly into their Calvins. 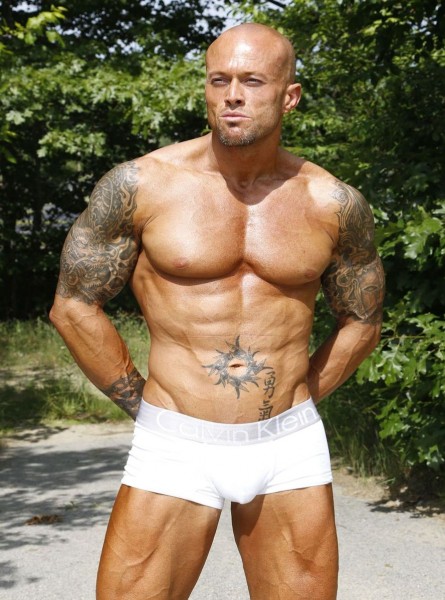 If the syphilitic art of yesteryear has taught me anything, it’s that everything you touch has VD on it. My hermetically sealed wet suit, cape, and black light virus zapper should be delivered tomorrow.