Preparations for Holy Week (known here as Semana Santa), the week before Easter, begin many weeks before the event.  Signs go up in the streets and alleys in which the processions shuffle along and I’ve been warned quite a bit about how crazy and packed it gets.  For example, in this most Holy of weeks, people furiously pick pocket and grope women.  Who do these cretins think they are?  The president of the United States?  I can’t think of a better way to celebrate the death and rebirth of Jesus, can you?

FIRST… I’ll summarize the event and maybe throw some numbers at you.  So like, there’s a buncha people who dress in these…. disturbing costumes (even more so if you’re from the US), carry candles, and walk all over Seville, to the fury of pedestrians and drivers who are desperately trying to get from point A to point B.  The walks are painstakingly slow and can involve a line of processioners a mile long.  A person holding a large ornate cross begins the line, then you have 1000’s of Nazarenos (the frighteningly dressed masses), then a lively band which favors the sound of bright trumpeters, the Jesus paso, more Nazarenos, maybe another band, the Mary paso, and straggling Nazarenos.  There’s live coverage and these processions, depending on the size of the brotherhood, can go on for several hours.  Brotherhood, you ask?  Each brotherhood does their own march, complete with their own version of Jesus and Mary pasos.  The costume colors and insignias differ for each church brotherhood.  That’s also why there are so many processions that run all day, and there are several that run simultaneously.  There’s a very complicated booklet that tells you of the times and places of the week’s events. 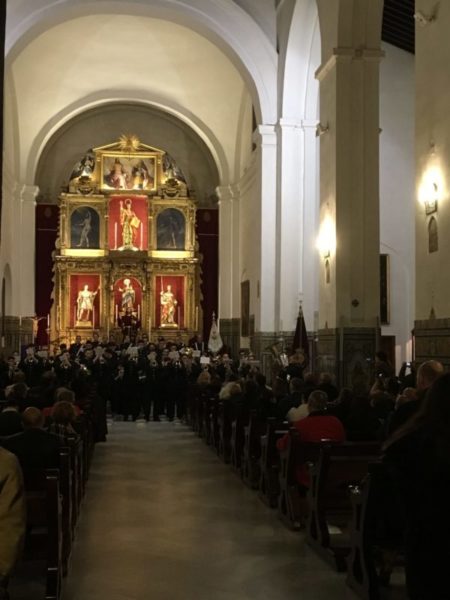 Hey look!  Here’s a band trumpeting their hearts out in a church!  Practicing for the march through the streets and hyping the crowd.

Seville is the place to be for these ritual processions that last all week long, and I stayed in an apartment that overlooked one of the procession routes.  I prefer to stay hidden away in the safety of an apartment complete with wine and also a bathroom.  (The cycle of life is complete in my private lookout!)  If you prefer to be in the big, sweaty, claustrophobic middle of it, you can buy a seat on one of the more popular streets.  I understand each seat goes for about 100 euros. 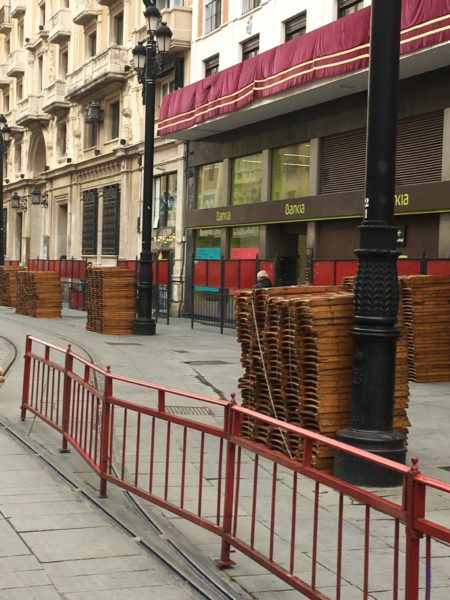 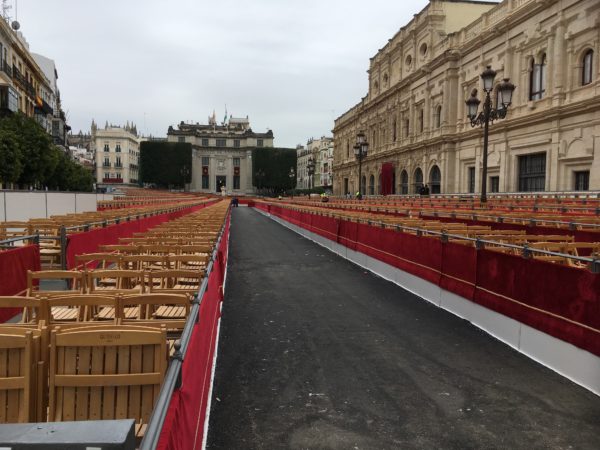 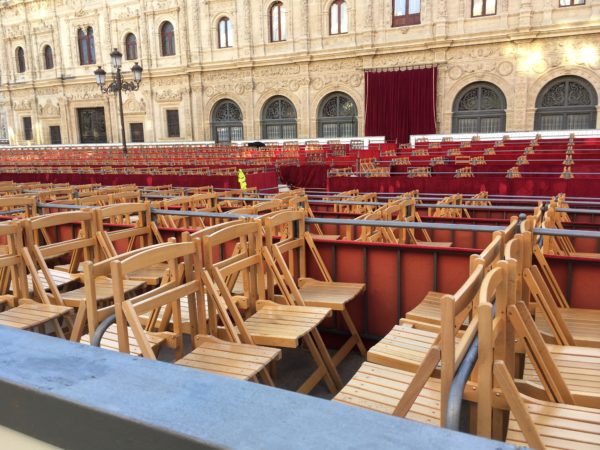 The paso will enter/exit through those red velvet curtains. 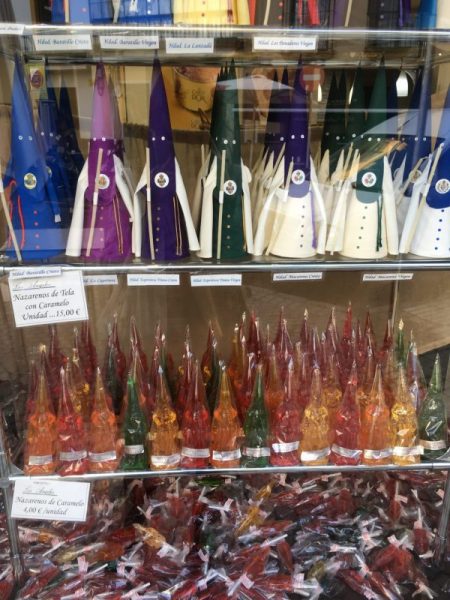 Candy Nazarenos.  I’ve never understood why we made food look like people and then eat it.

The hype around this event is insane.  I honestly don’t even think there are that many religious people here.  I think they’re here for the spectacle.  (Or the groping or pick pocketing.) 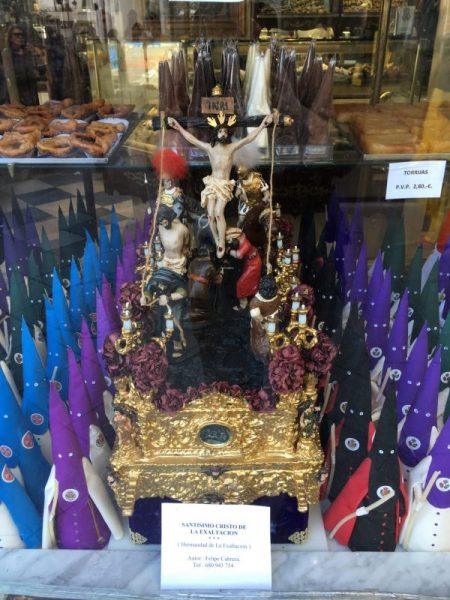 A candy paso with Jesus. 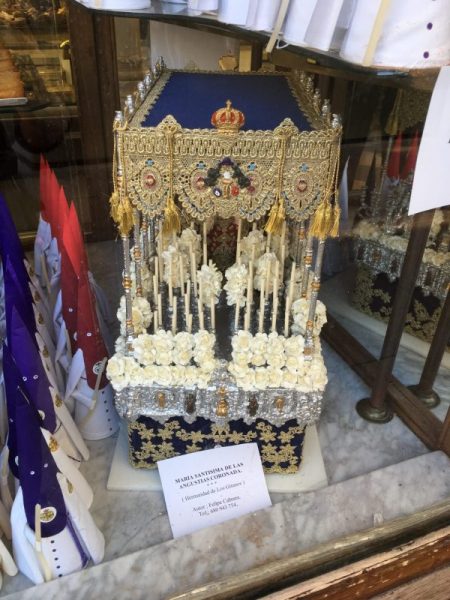 This style of paso is the one that carries Mary. 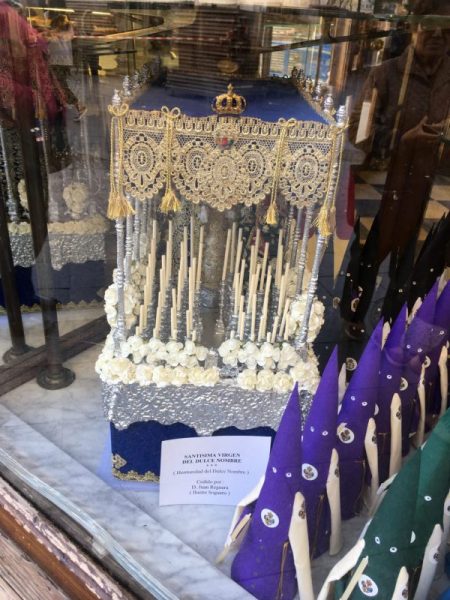 The paso is the star of the show.  Actually there are two pasos.  One of them, the first in the procession, has Jesus carrying the cross.  The second one that follows is the mourning Mary.  This ornate float is carried on the necks of several sturdy men.  That’s right!  When you see the videos of the float ambling forward, tilting this way and that, it’s because there are several live men underneath coordinating their steps.

You can see in the candy replicas that the Mary paso contains lots of candles.  Heck, you can see that in my photos of a real paso!  Here! 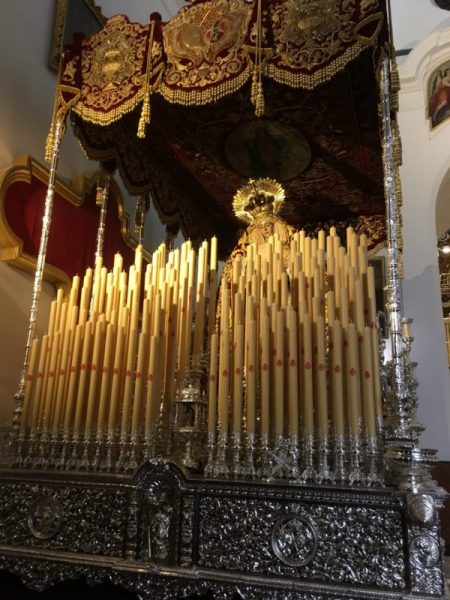 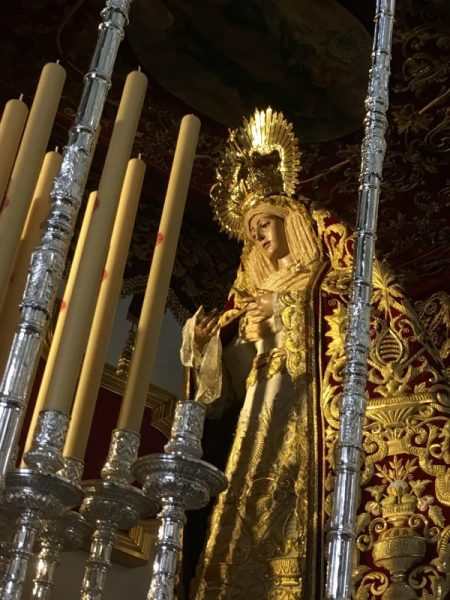 A closeup of Mary. 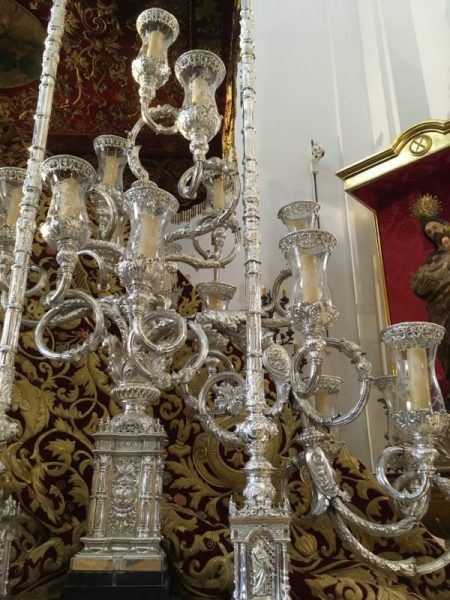 Decorations on the side. 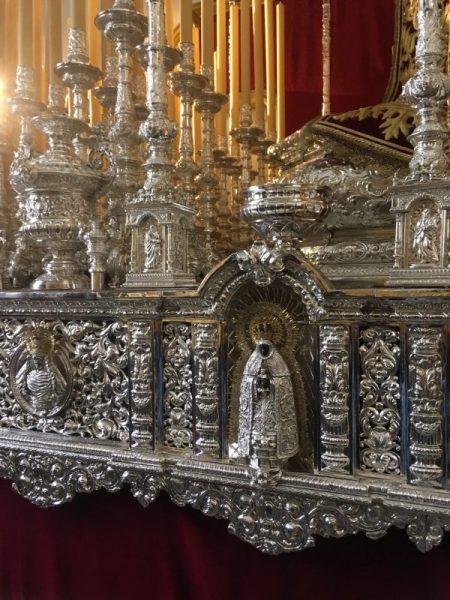 Silver leaf and gold too.

The group of sweaty and ever-training men that carry these huge, heavy, ornate things are called Costaleros.  Just look at what this burden does to them. 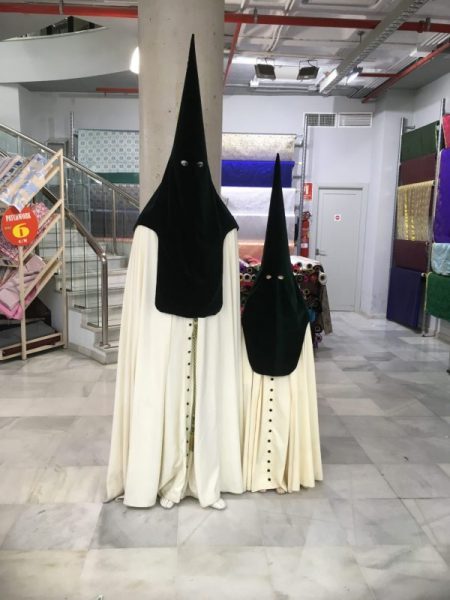 As I mentioned, the costumes are disturbing and strange but I saw plenty of children dressed as Nazarenos too.  Does that somehow lessen the threat?  In fairness, the Nazareno costume was around well before the cancerous growth of the KKK, and they most likely took the costume from the Spanish. 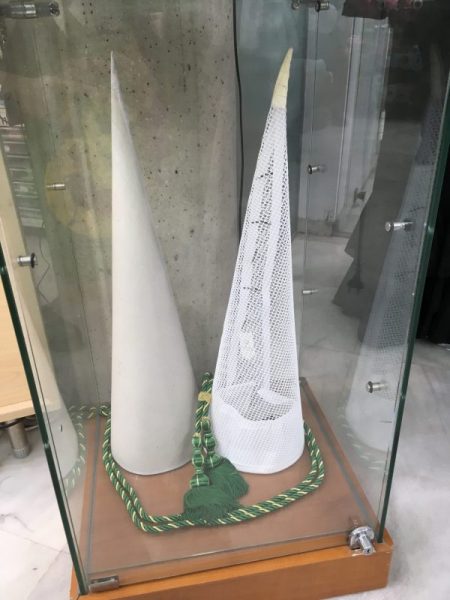 Here’s the structure for the hats. 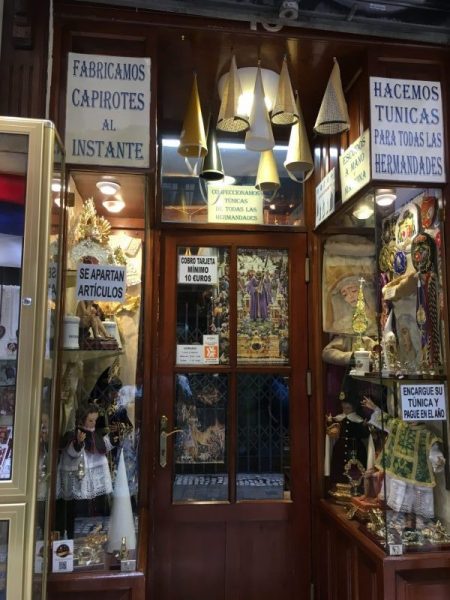 A store completely dedicated to the festival wear. 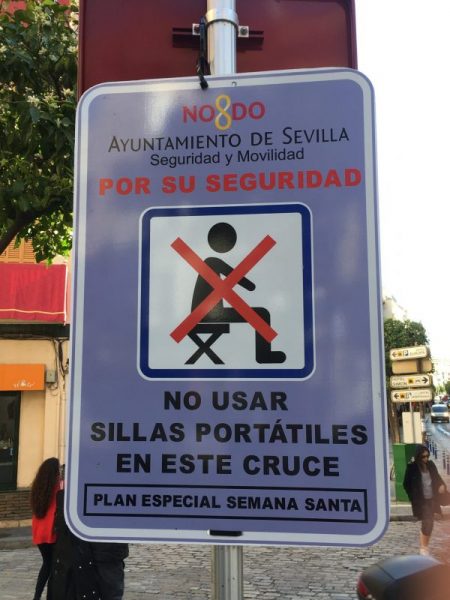 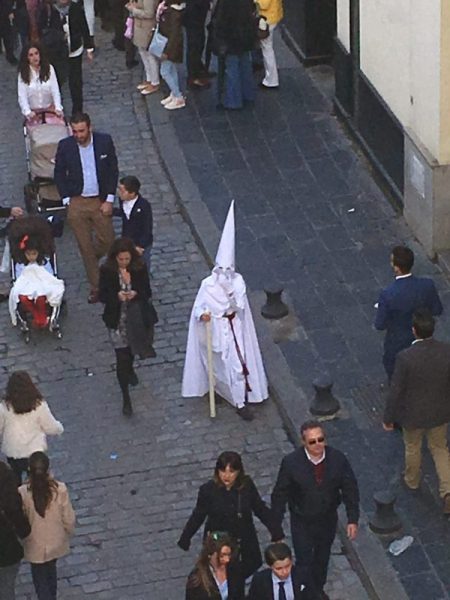 I don’t have to tell you how surreal this is.  I’ve never seen a KKK member in person.  Here, these costumed people are penitents hiding their faces out of shame, not masking them to intimidate.  Knowing this, I still had to do some mental gymnastics to simply be ok with all the festivities.  This Nazareno was hardly even acknowledged as they hurried along to their ritual destination. 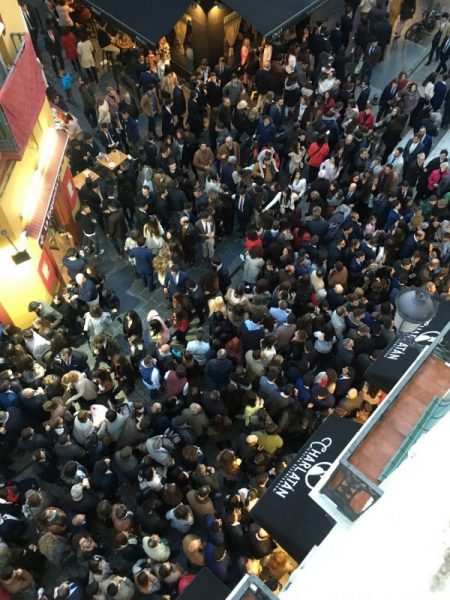 The crowd beneath Martina’s apartment.  So happy to not be down there. 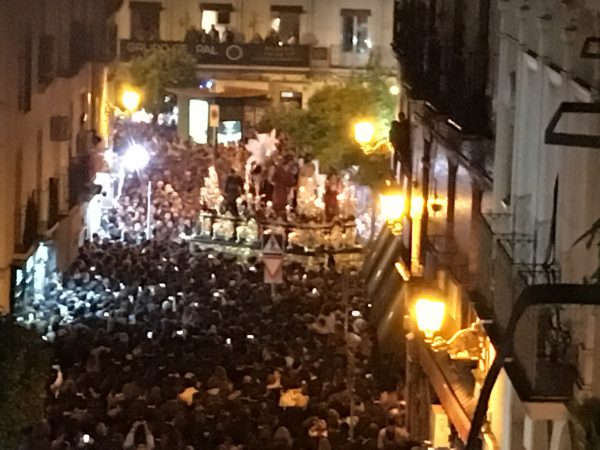 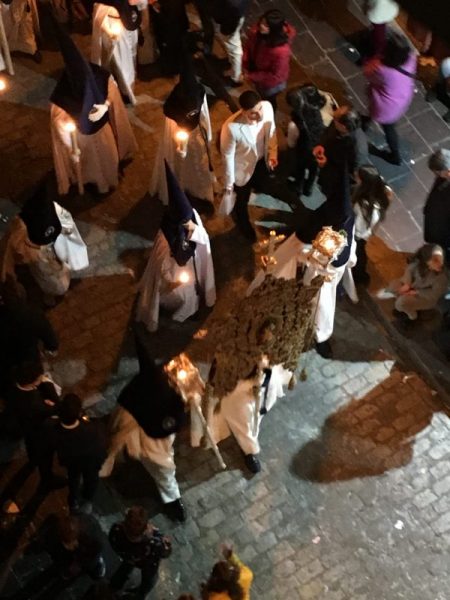 I did not film the procession, rather I chose to skype with my parents to show them this craziness.  I did make my way down to the street to do so, and it wasn’t as bad as I thought it would be.  My old ass wasn’t even groped!  (Thankful?  Disappointed?)  Mom was in her recliner and she has to harass Dad to get out of the tub to come watch.  He stood behind her, shirtless and damp with a towel wrapped around his lower body.  I held my phone high into the air so they could see and hear.  This is the image I presented to the pious Nazarenos.  You’re welcome, Spaniards!

I found a video on youtube that was close to the experience I had.  Here you go.

This is actually quite a comprehensive video, giving you a taste of the whole event.  If you want to really be in the moment, I recommend you light some frankincense.  There’s incense everywhere.

I also got to see a small, almost “cute” procession by comparison, in the tiny village of Castilblanco de los Arroyos.  As an added bonus it was also in the daylight.  The smaller crowd was much more my speed. 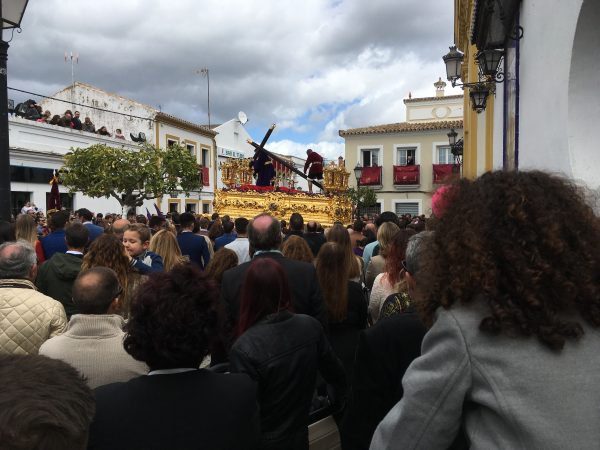 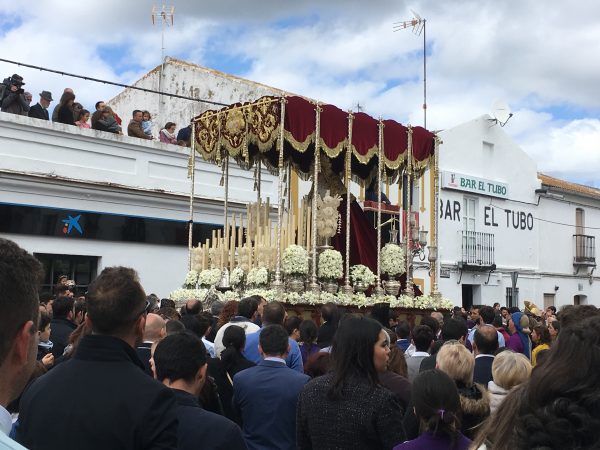 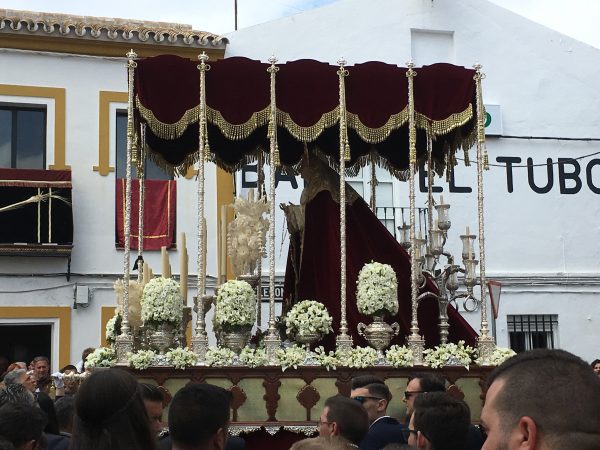 It was really interesting to listen to a man shouting commands to the costaleros under the paso in order to get the paso into the church without hitting the door.  They had to squat down low and still walk forward.  My thighs scream just thinking about it. 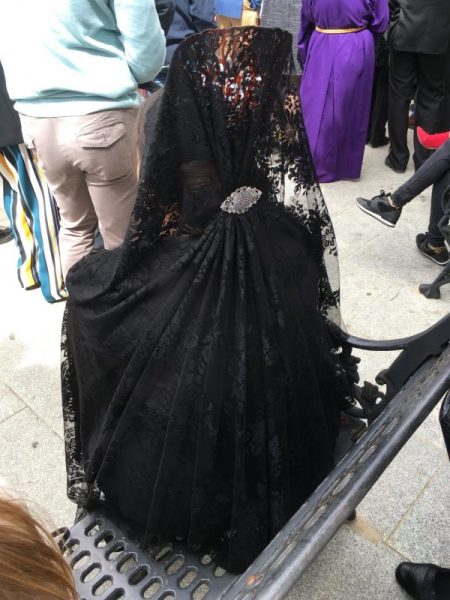 This is one of the women who dress in mourning attire and cry in a different procession.  (Each day brings about a slightly different ritual.) 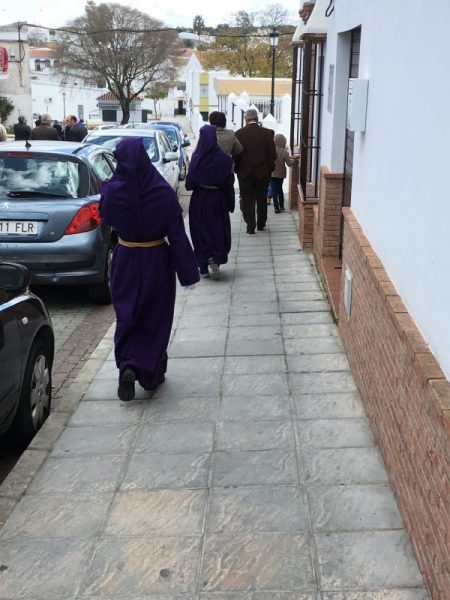 Caught some little Nazarenos after the procession was over.  They were making their way to join a gaggle of their little friends.  The one in the front actually greeted their friend with a firm and jiggly grasp of their butt.  I guess they train them early.  Is it appropriate to say, “The End” here?  I think it is.