My work took an unexpected turn here in Barcelona and you know what?  I am totally ok with that.  It’s kind of exciting, really.  All the work I had planned to do I finished in Seville!  That left me with no plan for my two month residency in Torelles de Foix.  I bought some more material to make a few more of those head cover things and I knocked one out pretty quick and started on another.

One of the cool things available here is all of the equipment.  There’s a full clay studio and also everything you could ever need for printmaking.  Hmmm.  These are things I don’t normally have access to, so maybe I should make use of them while I am here!  I started looking at linocut prints and decided I would do some work utilizing this process.  I knew I wanted to make some images of video cameras so I started carving linoleum.

What helped me make one of the more important decisions in this series was a piece of art that another one of the resident teachers, Gerardo Granados, was working on.  He’s a fussy and repetitive worker currently using micron pens and dip pens, which is a material/process that I have dabbled in myself.  He was drawing tiny glyphs in white ink on white paper.  You have to get close to see them, and once you do, it’s magical.  It was that thing right there, the sensual tease of the subtle color shift, that inspired me to make black prints on black paper.  (By the way, gotta do a little bragging on Gerardo.  Pope Francis now owns one of his works!)

So here are the linoleum cuts. 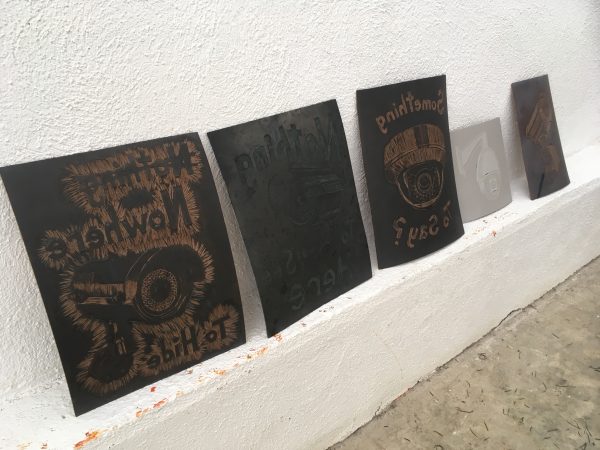 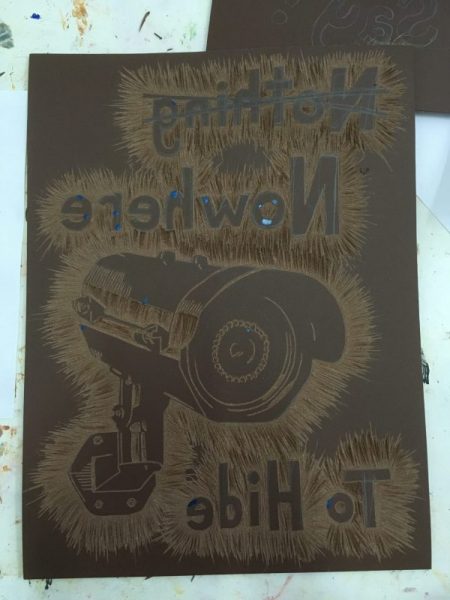 As I mentioned before, the black on black is what I’m going for.  I made a few prints on some colored paper to see what the print looks like.  I’ll show you those and the black ones.  The black on black prints (and later white on white) are very hard to photograph.  These are the first three I did. 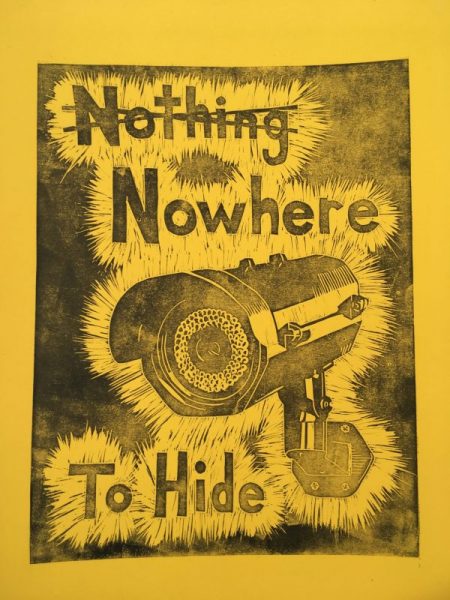 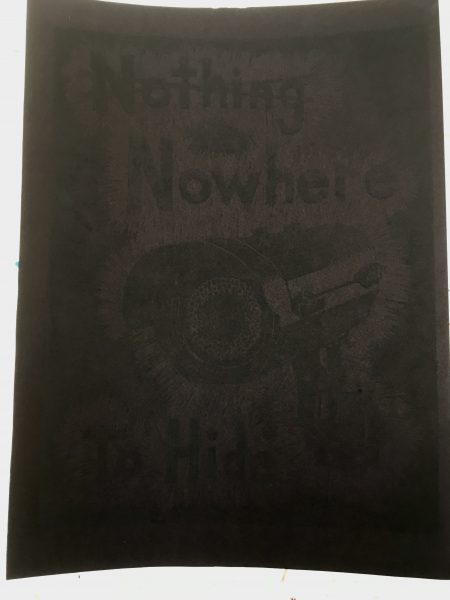 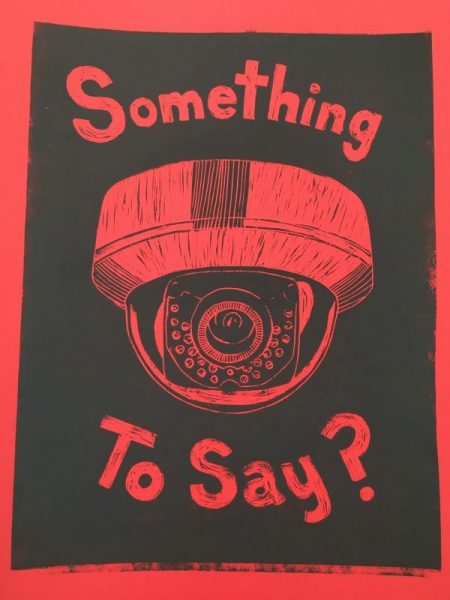 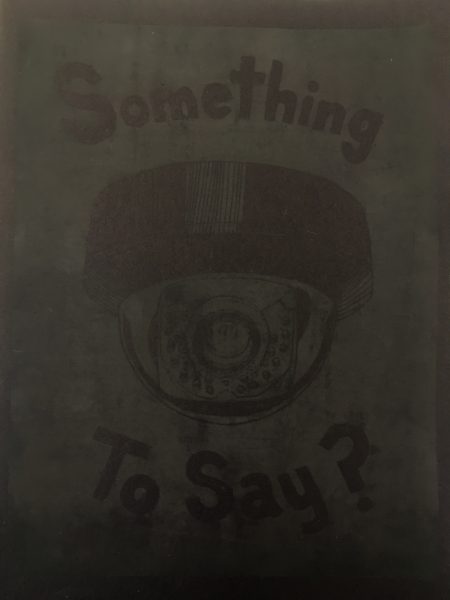 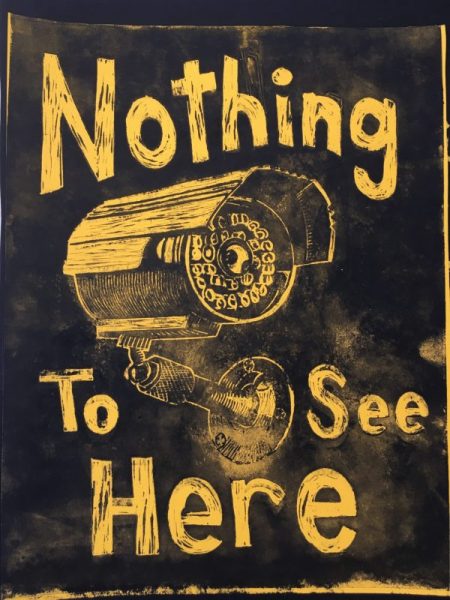 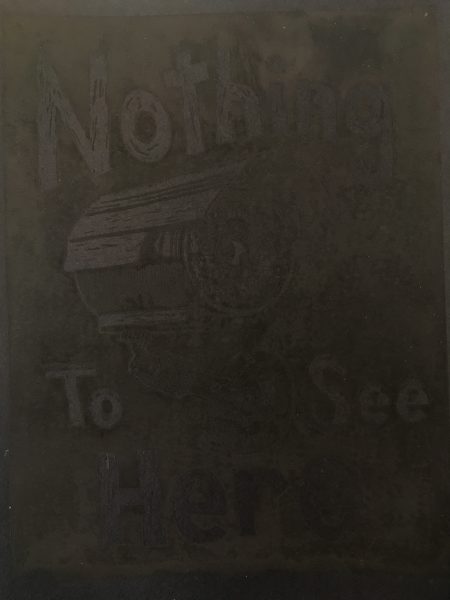 Even though I darkened these images in photoshop because my iphone is confused by the blackness, the images still don’t appear as dark as they really are.  Case in point – just look at how black the ink is on the colored paper versions of the prints.  They’re really rewarding to see in person!  I’ve made 100 of them and my plan is to put them all up on the wall at the same time.  I’ll put red lights behind some of them to make it look like the cameras are recording.

After I made these, the phenomenal Robert Philip, an educational designer, said he’d like to see some without text.  Challenge accepted!  I had a couple of smaller pieces of linoleum and I did two more prints.  These became the white on white prints… though the ink is more ivory.  (I don’t like the ivory…) 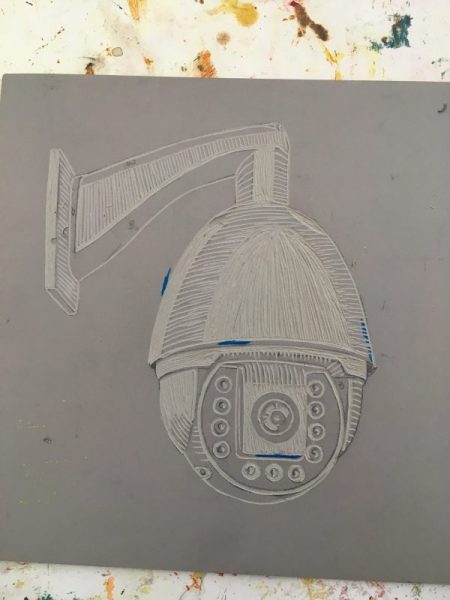 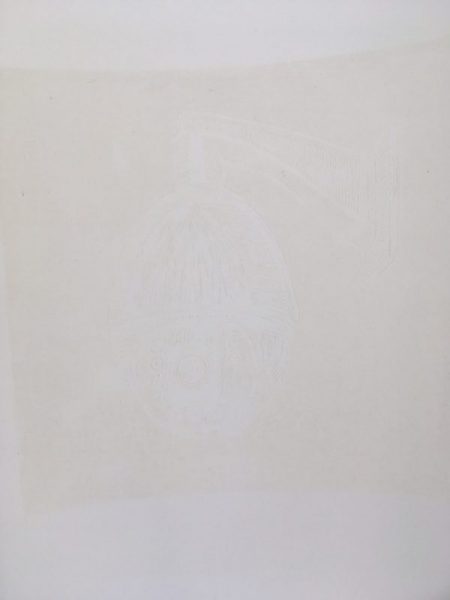 Ivory on one kind of white paper. 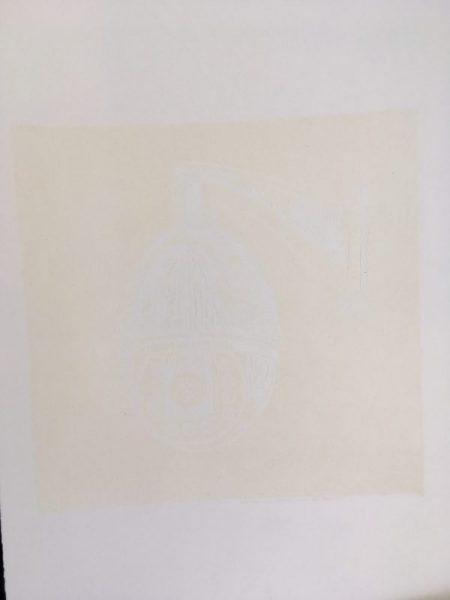 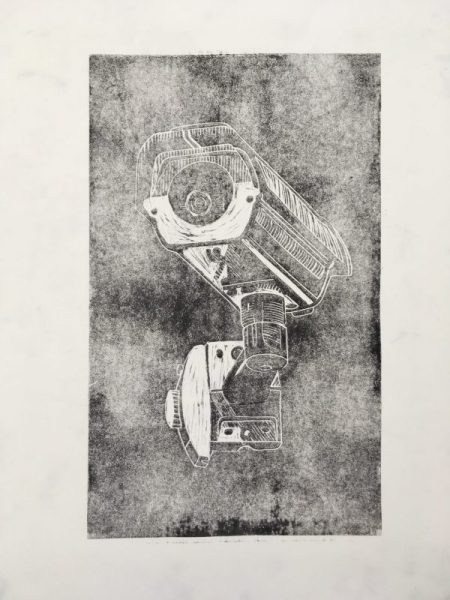 Clearly this isn’t white ink, but it’s an artist’s proof print.  It’s also a ghost print, which means that I’m running the linoleum through the press a second time.  Since most of the ink was pulled off of the first run, the ghost print is lighter.  Gerardo pointed out that it looked like a grainy surveillance image of a surveillance camera.  Sigh.  So good to get other artist’s feedback. 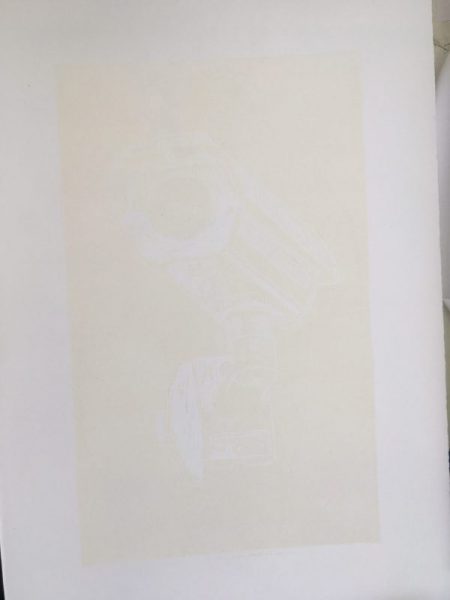 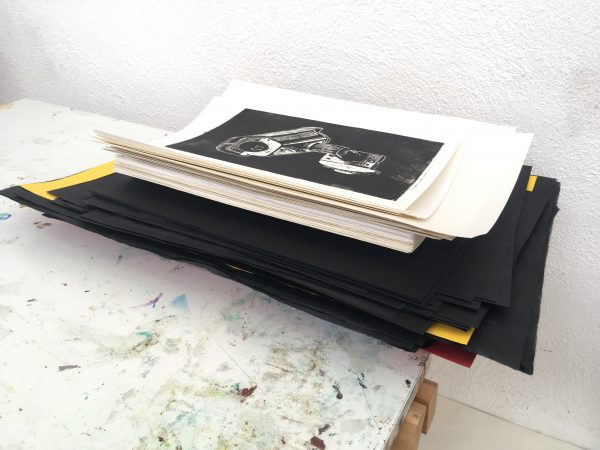 RIGHT.  So… I’m hoping to get a show with all of this work.  See my stack of prints?  There are close to 200 pieces here.  And you know what today is?  It’s the official last day of my sabbatical.  It’s now “Summer” and I am once again fully employed by the college and performing regular duties.  That means that these pieces are available for sale as of today.  If you are interested in purchasing or even just seeing these, please contact me! 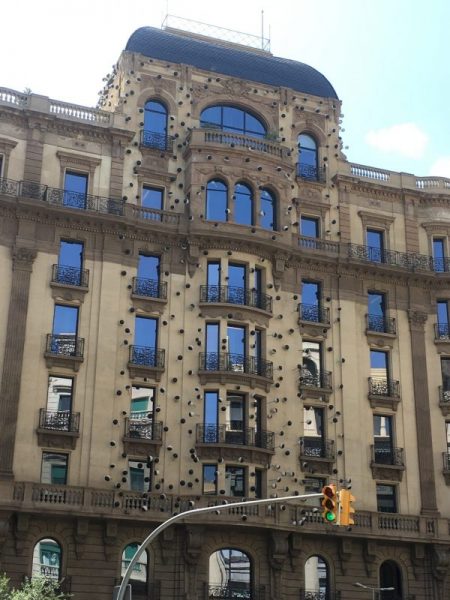 Bonus image.  This is a building near Ramblas in Barcelona.  The little nodes/growths/modules are eyeballs but they very much resemble surveillance cameras.  Eyeballs evoke the same feeling, of course.

P.S. Stalkers and pink eye and bed bugs, oh my!  Hey have you subscribed yet?  What happens when I quit facebook?