Ok.  I have to tell you about my mini vacation between residencies in Granada.  Most of this post is filled with pictures of the Alhambra but there are a few other memorable experiences from the city as well.  In general, Granada was breathtakingly beautiful and colorfully exotic.  While my heart is warming to Barcelona, Granada is still my favorite city so far. 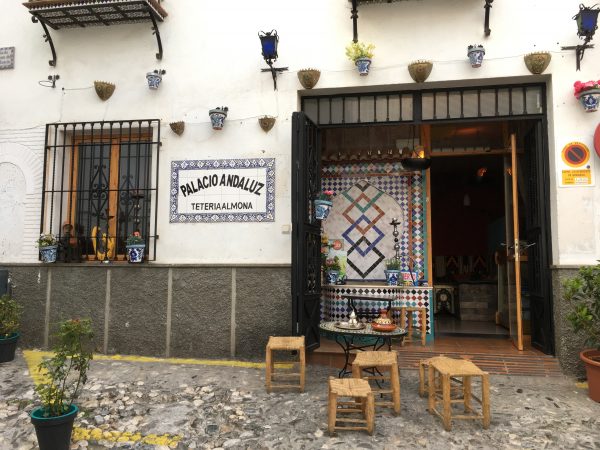 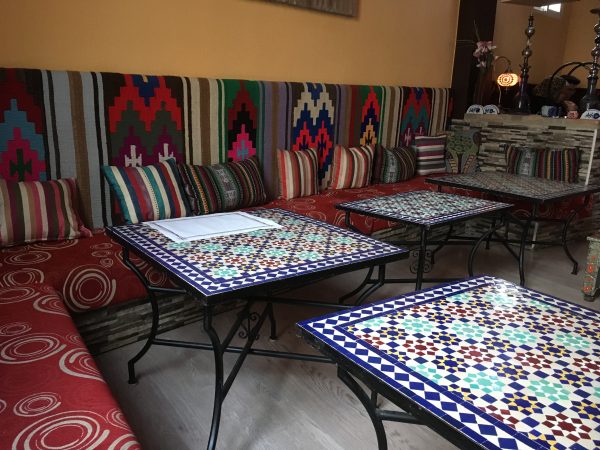 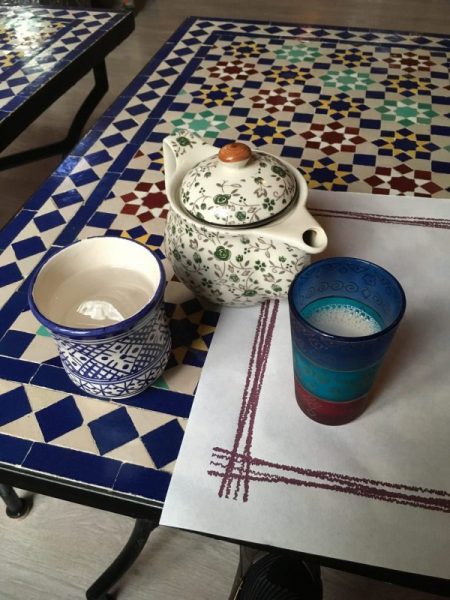 A few of you may have made it over to my review of the Moroccan restaurant where I had my first meal in the city.  Here’s the review.  LOVED it, but I didn’t get a chance to get back before I left.  It was still my favorite restaurant there.  Never got a picture of the tajine I had.  SO GOOD.

I just freaking loved this city.  I loved the layout, the flavor, the people, and… dare I say it, the history.  (If you guys tell anyone I loved the history of anything I will straight up punch you in the kidney.)  Most of the rest of my post is about the Alhambra, even though I didn’t end up getting tickets to see the palace.  So pissed.  More on that later.  I could have titled this post “Alhambra” but that leaves out the hammam I went to and that would have been a super short post.  Ok.  Here’s what I saw of the Alhambra.  Warning: Tremendously image heavy. 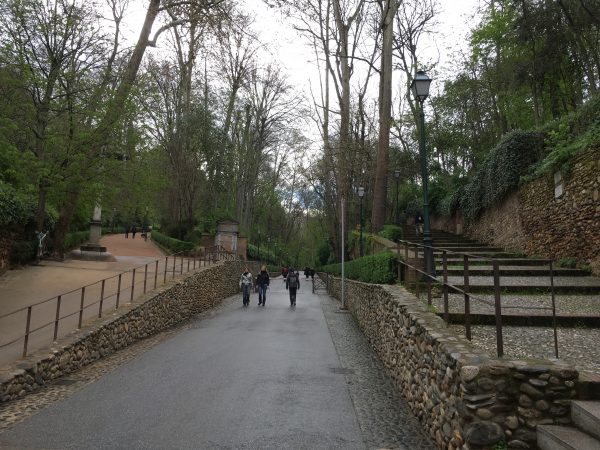 Steep walk up the hill through a lovely treed area. 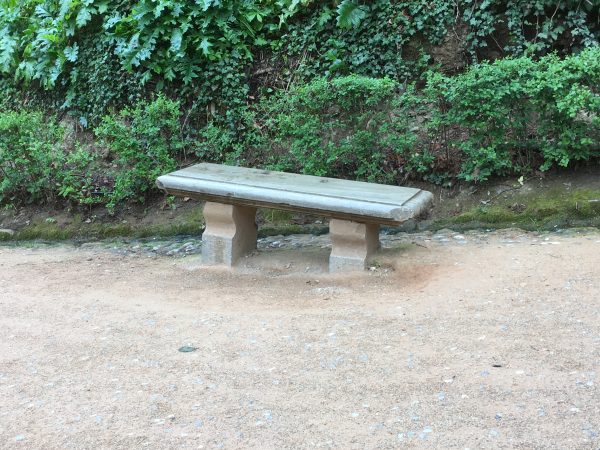 See how the bench is straight and the dirt is at an angle?  Turns out it’s a rather steep angle to hike. 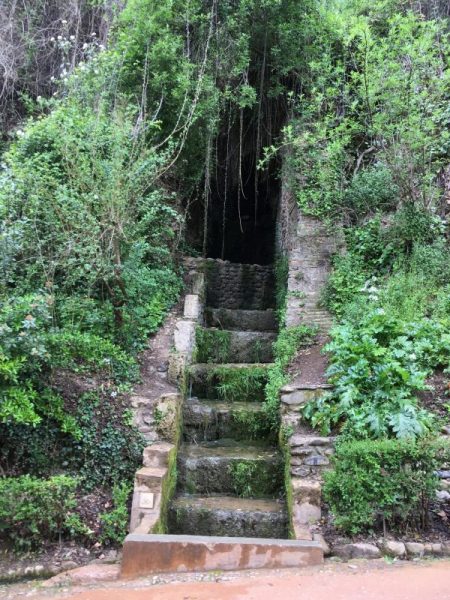 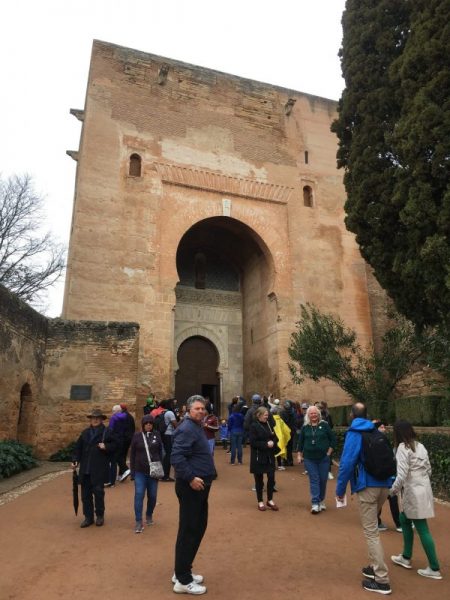 An entrance to one of the free areas.  Very difficult to de-people my photos at the Alhambra. 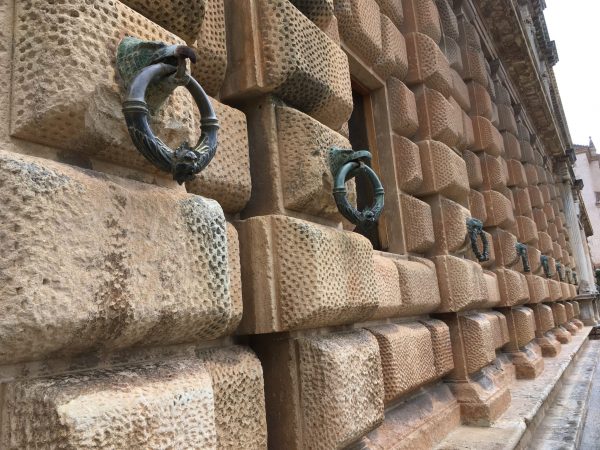 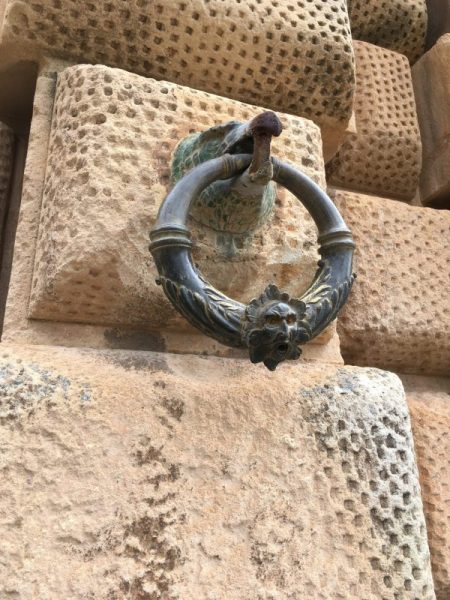 Detail.  Look at the texture on the bricks! 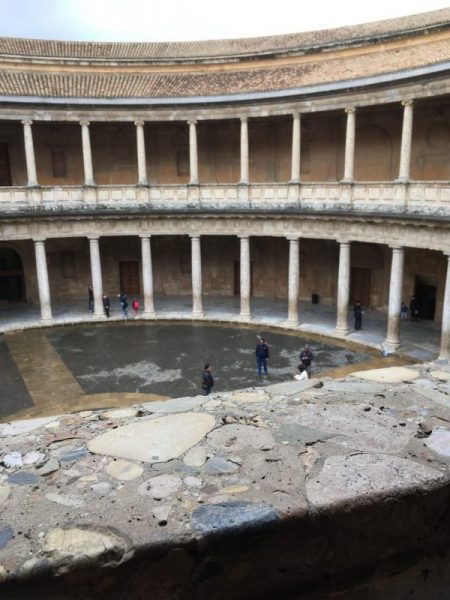 The interior of this building.  This was in the free area.  There was also a free art gallery here, mostly religious work, but there were some modern pieces at the end.  A respectable collection.

Another view of the interior space. 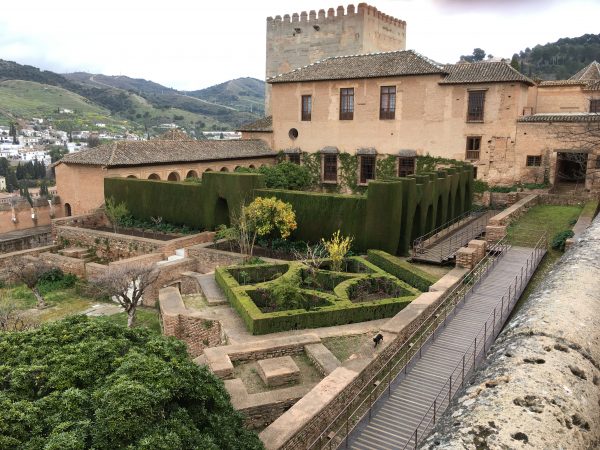 This was an area that I couldn’t get into.  It was a pretty unimpressive building compared to the areas I could explore, but it’s apparently part of the palace that everyone books months ahead of time. 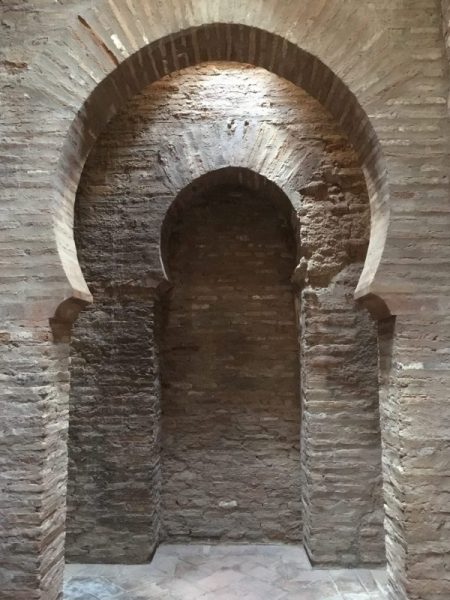 This was part of a living quarters. 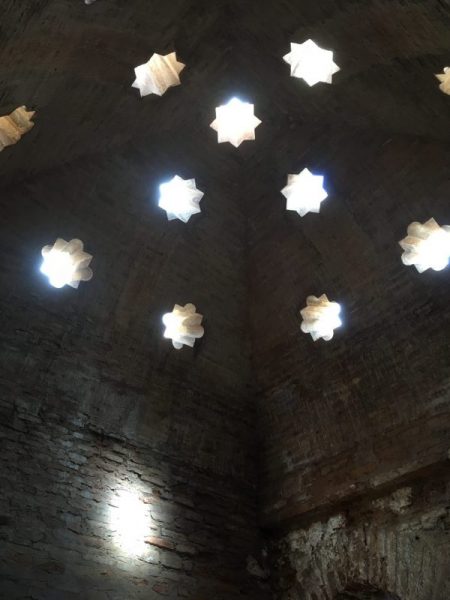 Light coming in through star shaped holes in the living quarters.  How did they keep from getting wet when it rained?

But Sue Anne!  What’s the Alhambra and why should I care?  It’s only a UNESCO World Heritage Site where Queen Isabella, in 1492, I don’t know… gave Chris Columbus some ships.  I didn’t know I’d be going to Granada on this trip, but my friend Lorena’s Brother and Sister-in-Law talked me into going there.  (I’m so glad! Thank you Eloy and Naiara!)  It was only when I made that decision and started researching the city that I learned about the Alhambra… and how difficult it is to get tickets.  I had read in several places that the tickets are sold out months in advance but that if you go at 6 am and get in line, two hours before they open the ticket office, they sell 200 tickets first come first served.  I was there at 6 and I was the fourth person in line behind a Mexican guy and a Japanese couple.  SWEET!  We would all get in!  We chatted very amiably and the guy from Mexico (the first in line) was there on his honeymoon.  When the information screens lit up they only showed 50 tickets for sale.  That made us all even more relieved that we had shown up so early.

Strangely, the groundskeepers let another line start next to us. These people had arrived way later than we had, so I couldn’t figure out what they were in line for.  They also let that line go in first when it was time to let us buy tickets.  I wasn’t worried about it though, because fair is fair and we were there first!  Surely there was a magical 50 tickets waiting for our line, because WE were there at SIX.  Newlywed Mexican guy ran up to a counter.  I saw much discussion between he and the ticket sales lady.  He passed by me afterwards and I asked if he got them and he said yes.  I pumped both fists in the air in celebration for him but he looked guilty and quickly scurried away.  That’s not a good sign.  The Japanese couple was next.  They only knew English as a second language so they couldn’t communicate as well at the ticket counter.  As they meekly walked past me they told me the tickets were sold out and that there were only garden tickets left.  I felt so sad for them… and me, but surely there was a miscommunication.  There wasn’t.  In my chopped Spanish I argued as much as I could but left with only a ticket to the Gardens.  I was pretty disappointed but really happy for the Mexican guy.  Not only was he there on his honeymoon but he had just been accepted to Med School too.  His whole life was ahead of him and he deserved those tickets.

My tickets let me into the gardens and this cool fortress tower area.  I was happy to see these places.  Below are the gardens. 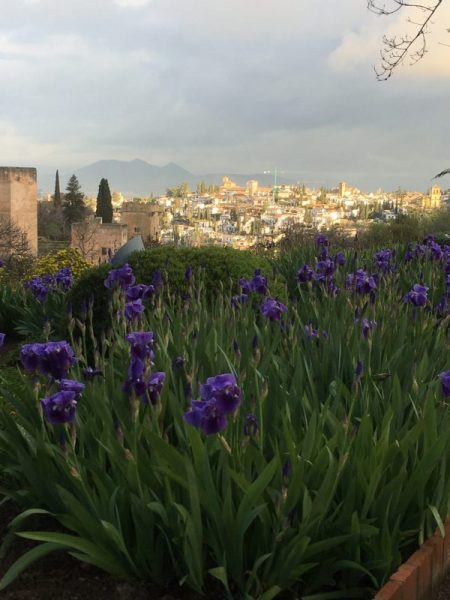 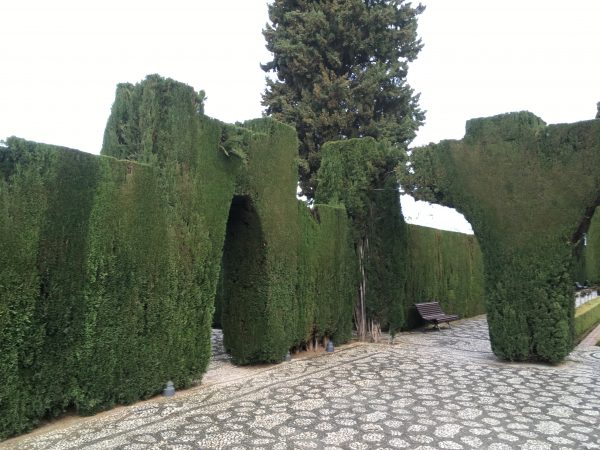 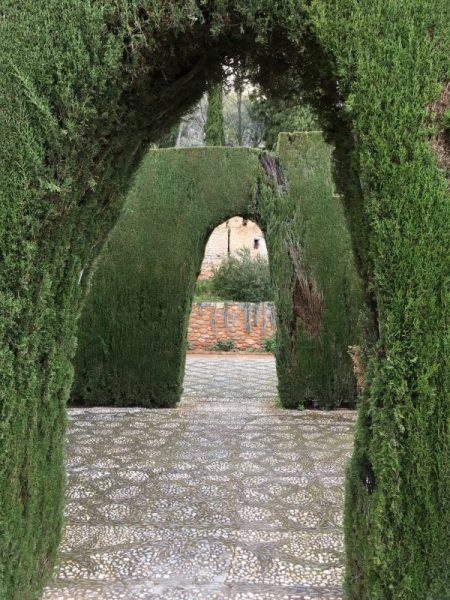 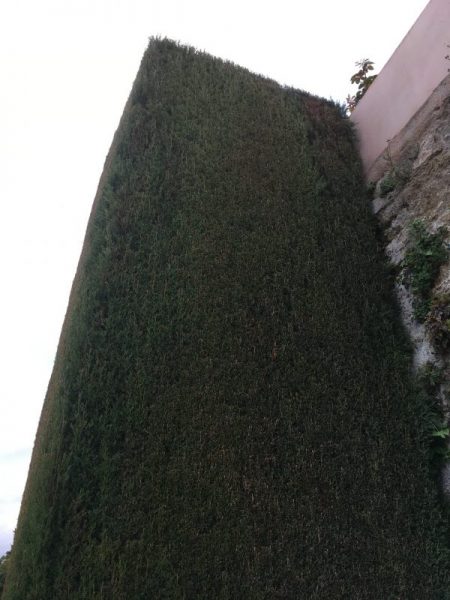 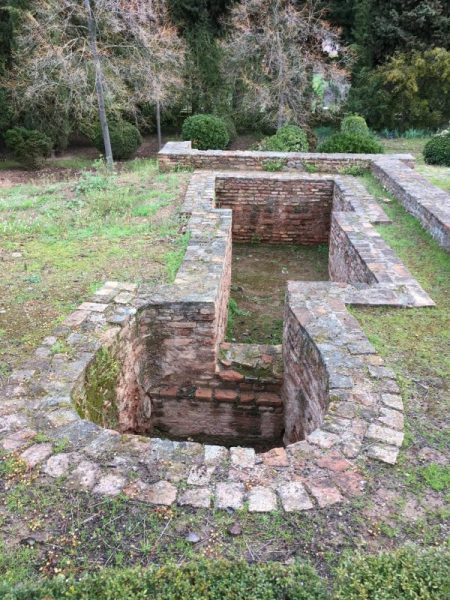 Worth mentioning here that I have no idea what this is.  I liked the shape though. 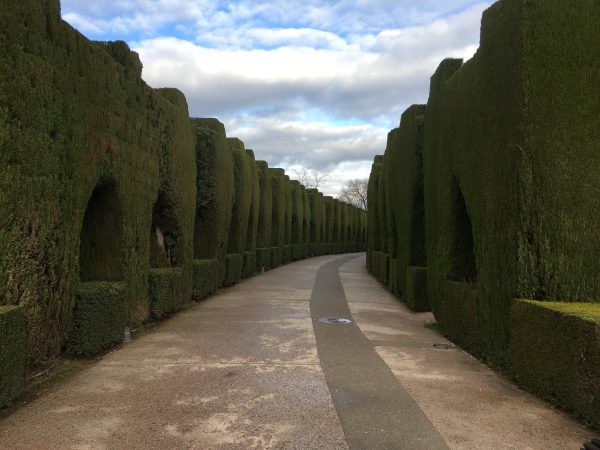 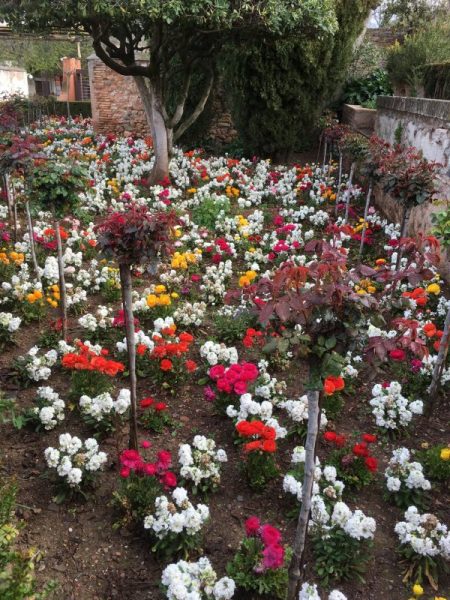 The tower thing that I got to see was hard to photograph.  What was awesome to photograph from the tower was the surrounding city! 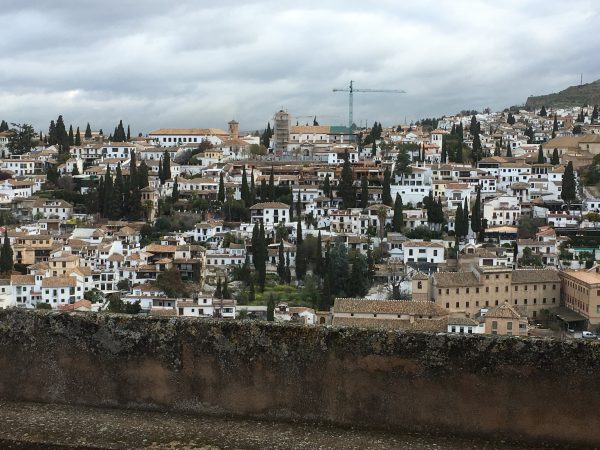 I didn’t get the earphones for the guided tour but I’m assuming that these labyrinthine areas were the living quarters of the soldiers?  Just a guess. 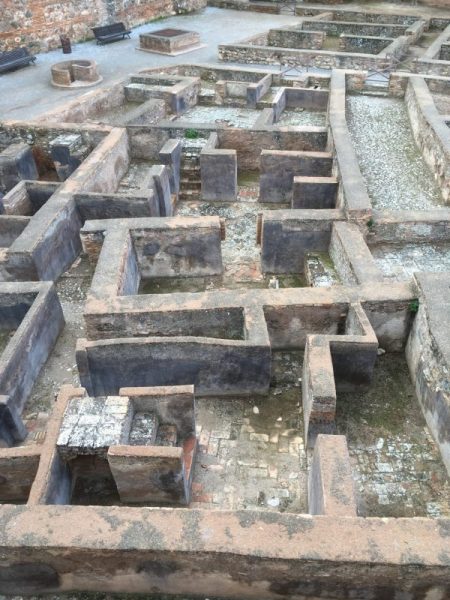 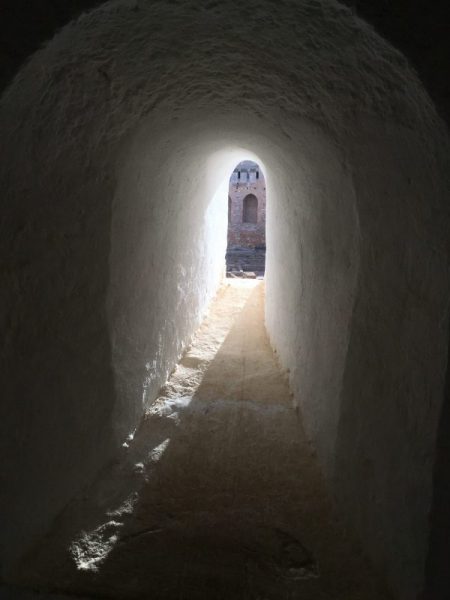 This is a image through a deep window of the last tower I climbed.

Lastly, the grand finale of the photos, the panos from the towers.

My final experience in Granada was a visit to the hammam.  I saved it for my last day and I needed it because I was building up stress and worry for my trip from Granada to Barcelona.  That was a 12 hour trip I had coming to me with all of the train and bus shuffling and when I’m not great with the foreign language and not accustomed to traveling on trains and buses and will I be on time and will I catch the right bus/train and OMG IT JUST STRESSES ME THE FUCK OUT!  So, what better thing to do than to soak in a hot tub/small pool with a bunch of strangers?

I researched several hammams in the vicinity and decided on the smallest one because in their reviews people commented about how wonderful and nice the staff was.  There was also a mention of complementary tea, fruit, and chocolates.  I chose Baths Elvira and I was happy with my choice.  What’s a hammam, you ask?  It’s a Turkish public bath.  The links are worth a look!

This place, being small, only took about 8 people per hour.  I was still in close quarters with them but it didn’t feel uncomfortable.  I opted for a basic package with the pool and sauna only, skipping the massage because most of the reviews complained that the massages were too soft or weak.  Well.  I’m used to getting beaten up like a MMA fighter when I get massaged so I was having none of that.  The other common complaint about these baths was that the water in the hot water pool wasn’t hot enough.  This is true.  The owners of these establishments will defend themselves by saying that that’s a typical temperature of the hot pool for a Turkish bath.  It was still nice, but my bathtub water is hotter than their pool.  There’s also a cold bath that you’re supposed to jump into after each stint in the hot bath.  That, my friends, was miserable.  I’d take a quick dunk and then slip into the sauna for a bit.  All in all, the music, atmosphere, cleanliness, and friendliness in Baths Elvira was exactly what I needed.  I’m super glad I experienced it!