Return of the Spanish sweets.  New region, new flavors, though I do see some of the same sweets I saw in Andalucia turning up here and there.  In my extreme dedication to you, my readers, I am truly taking several for the team by eating all of these sweets.  Now you have to understand, I love sweets, I do, and there was a time I may have even been known for that, but that was many, many years ago.  When I’m at home I’m pretty regimented about how much honey or maple syrup goes into my tea, my dessert is usually a couple of blocks of dark chocolate, and the calories are counted and plugged into “Lose it” to make sure I am staying on track with my health goals.  Even though there are no calories in Spain, I envision that if you sliced open my belly right now, the cross section would look just like bacon.  Sigh.  BRING ON THE SWEETS, BITCHES! 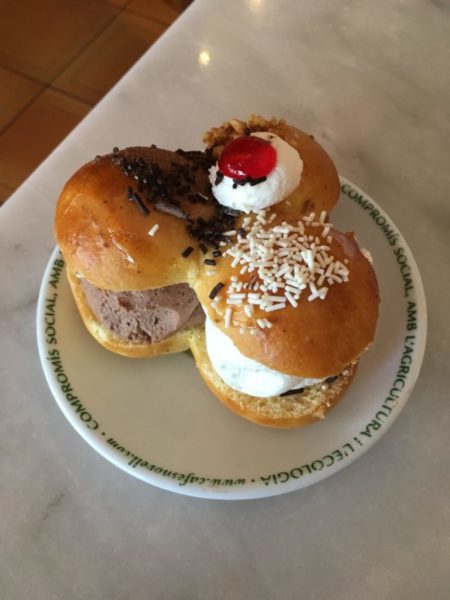 There’s this patisserie in the little town of Torrelles de Foix (Foix is a word that I want to pronounce “fwah” like the French would, but it’s “fosch” because it’s Catalan.) and it’s rated pretty well on google maps.  I went there with fellow resident, Vivian Rosas, on my first Sunday in the area and was blown away by all of the goodies that this place had oozing out of the cases.  So I got this crazy triple flavored cream puff thingy.  The chocolate cream tasted like mousse.  It was pretty great, but I wasn’t a huge fan of the bready stuff that impeded my ability to get to the cream.  Don’t be silly though, I ate the whole thing.

8/10 Mayyyyy buy again, but will probably pass for trying something new. 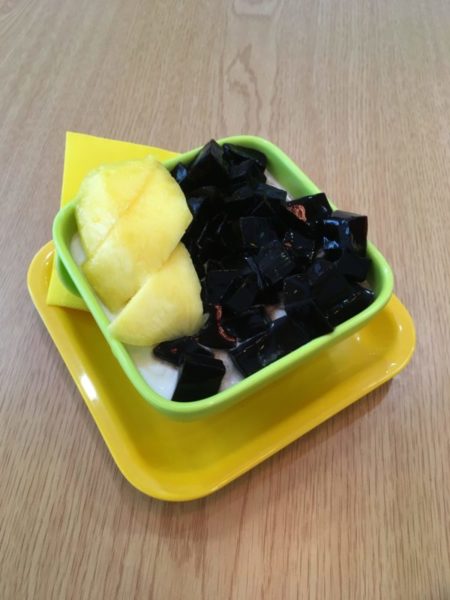 Ok to be fair, this really isn’t a Spanish sweet but it’s no secret that I seek out Asian food wherever I go.  (Which was terribly convenient for me in Japan.)  I was seduced by the place and ate there in spite of mediocre reviews.  This is grass jelly and mango on the top of coconut shaved ice.  Too expensive for what it was and it was indeed mediocre. 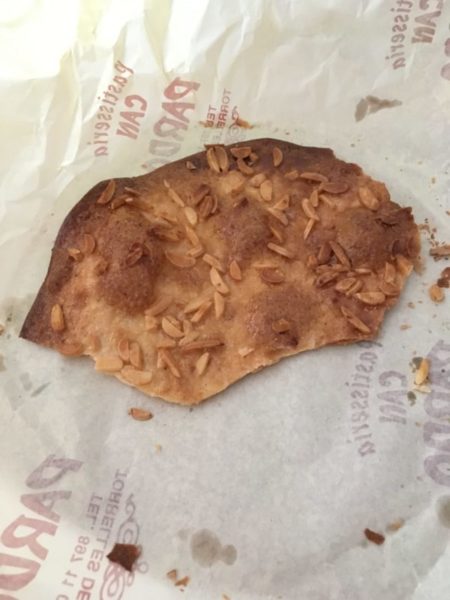 Back to Can Pardo.  This is a simple flour tortilla (half eaten already) fried to a golden brown and coated with a light layer of honey.  Sprinkle in some almonds and done.  I really liked it.  It wasn’t too sweet and it was a satisfying snack.  I even started researching recipes for possibly making them in the future.

Not pictured are two desserts also from Can Pardo.  (I’m going there about 4x a week.)  After my brilliant experience on that first Sunday I was expecting all of my following experiences to be exactly the same.  Nope.  Apparently because the weekdays are much slower, the cases are stocked much more sparsely.  My choices were sad and I had a cream filled doughnut called a Xuxo (pronounced “shooshow”).  Meh.  It was a cream filled doughnut.  Good for what it was though.

…but the other thing I got there on a weekday was!  It was a moist and dense pineapple cake made out of pure rapture.  I look forward to more.  They had other flavors of the same kind of cake too. 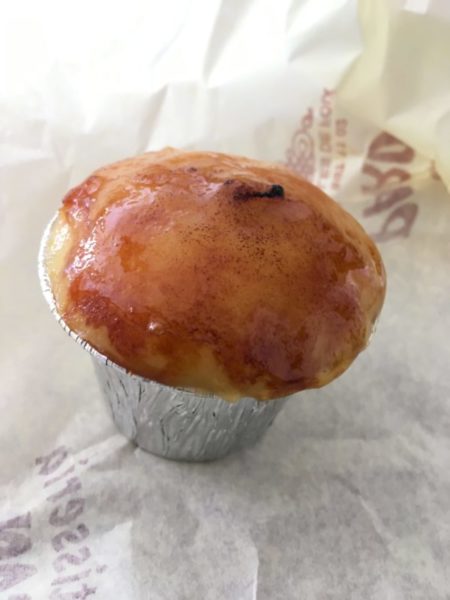 Here’s this thing.  No idea what I would find inside. 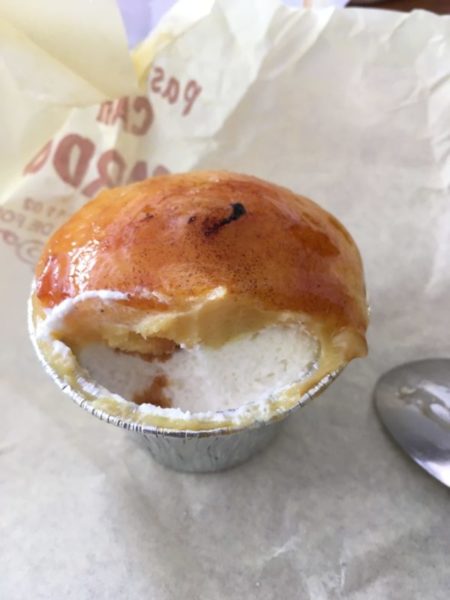 Oh!  It’s sky pork on top of cream.  That’s… a cup of cream!  I ate this in two sittings because it was very sweet.  I’m all for sky pork in all of its’ iterations but the cream came across as filler for me.  Would have liked some cakey element in there somewhere.

6/10 Would have been a 5 but since there’s sky pork involved I’ll give it an extra point.  Won’t buy again. 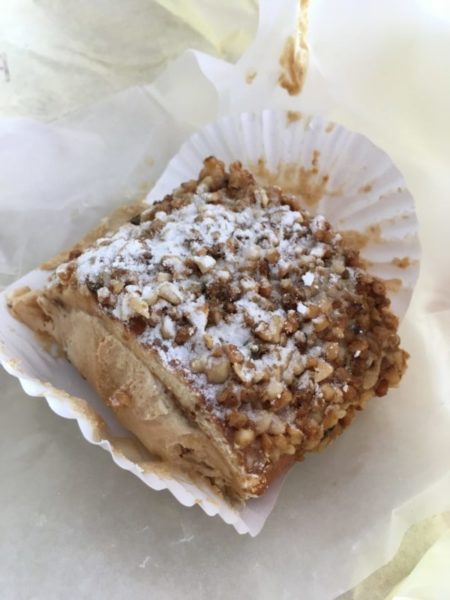 More cream.  A theme!  This was a thin sweet pancake-like pastry wrapped around cream.  Not sure what flavor the cream was, maybe hazelnut?  And obviously there are nuts sprinkled on the top.  Enjoyed it but it was a little too sweet. 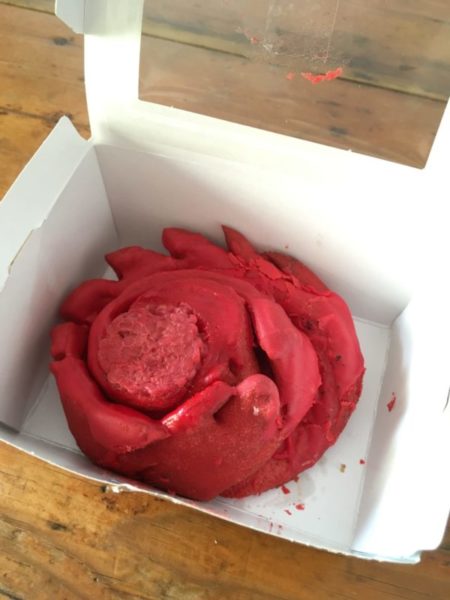 Vivian made an excursion into Barcelona on Saint Jordi Day, which is Catalonia’s Valentine’s Day.  I asked her to find me something that was a typical sweet commemorating the day.  It’s traditional for guys to exchange a single rose and a book with the object of their affection on this day.  Vivian found a raspberry flavored, rose shaped cinnamon roll for me.  It doesn’t get much more Saint Jordi than that.  The flavor was good but the bread was dry. 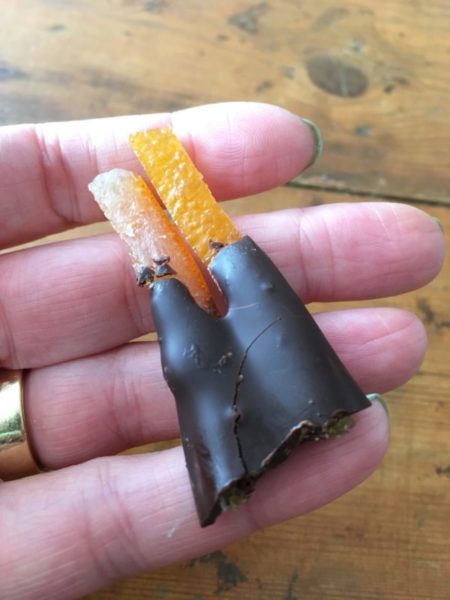 These are…  I don’t…  How can…  How can something be so good that I can’t even finish a sentence?  I can’t even.  These are dark chocolate covered candied orange peels.  At Can Pardo, I asked for a “mano” full and mimed grabbing a bunch with your hand.  The girl behind the counter gave me a small handful and asked if it was ok.  I said yes.  Now… now I have to go back for more.  How can these two stupid things together be so phenomenally awesome?

10/10 (If you didn’t guess this already.) Heading back for more tomorrow. 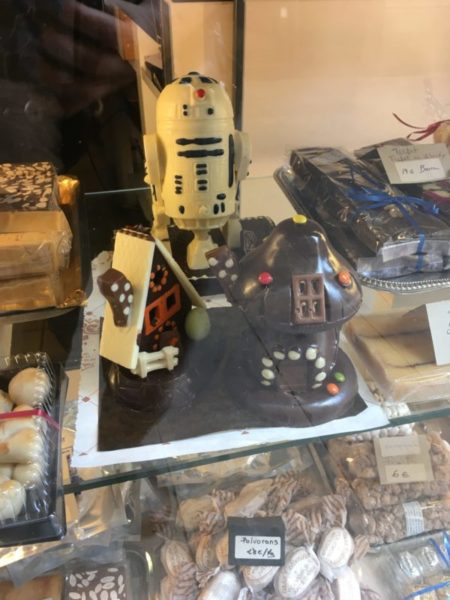 Bonus pic!  Took this through the window at a candy store in Barcelona.  It was a chocolate R2D2.  I couldn’t resist!