Madre. De. Dios.  I just saw my first flamenco show.  I was blown away.  While Seville is apparently the place to see a flamenco show and I was just there, I was just too busy to get one in.  I’m told that the flamenco in Granada is flavored a bit different (apples and oranges) and that the cool thing I could see in Granada is gypsies dancing flamenco in caves.  Caves!  Ok!  I saw pictures of a “cave” performance… and Spain’s definition and my definition of cave are very different.  Still, I tried to book a show in one.  Both places’ websites had a glitch that prevented this from happening and I was beginning to think I wasn’t going to see a show when I found Jardines de Zoraya. 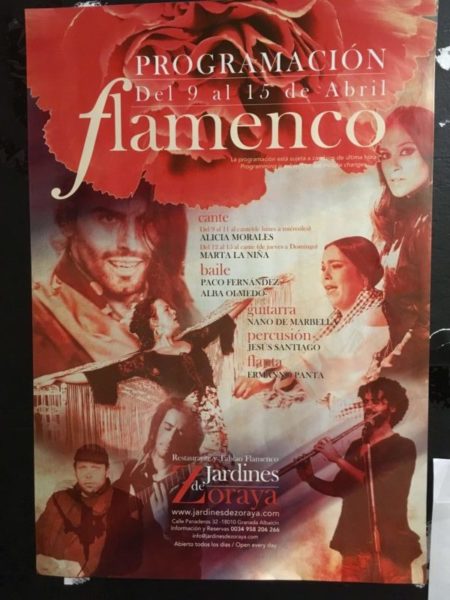 I can’t for the life of me find the legitimate source that said that flamenco has roots in belly dance.  It makes sense though, seeing as it’s heavily infused into the gitano/gypsy culture.  (Gitano and Gypsy are both terms taken from the word Egypt… though it’s a little more complicated than that.)  Truly though, I saw much more tap dance than anything.  I thought the castanets would be just like the zills too.  Nope.  They’re held differently and played differently.  Maybe some arm positions are the same, maybe some core body moves are similar, but I barely recognized any belly dance in there.  Perhaps it was because this is a particular style of flamenco.  There are LOTS.

ANYWAY… let’s get to the experience.  I had a ticket for a dinner and show and was just finishing my dessert when it began.  The guitarist, Nano de Marbella, and flautist, Hermanno Panta, began to warm up and even their warm-up blew me away. 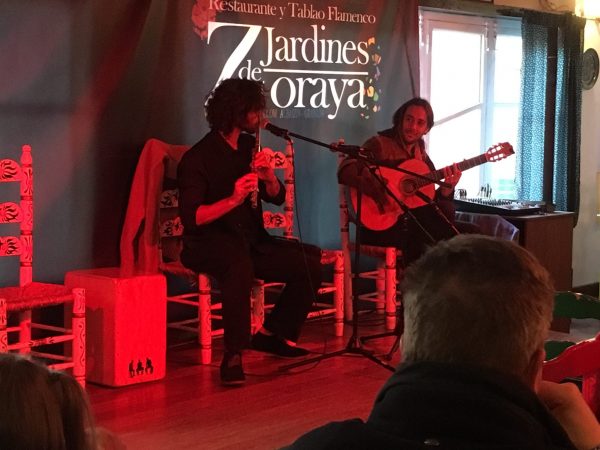 When the seats on stage were filled with the flamenco entourage, the singer, Alicia Morales, made her dramatic entrance.  The was so much emotion in her voice that wet stuff filled my eyes.  The female dancer, Alba Olmedo, was the first one to get up and take the stage.  The strength, passion, and endurance that she has is motivating.  I really love it when the flamenco dancers grab their dresses and hold them or swish them around.  She’s good at that. 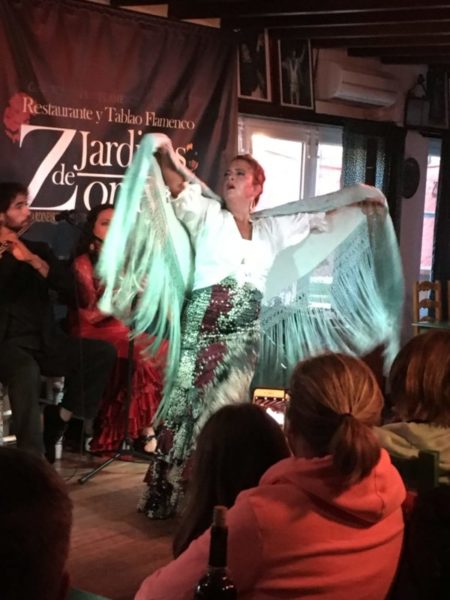 At this point I’m starting to get irritated at a table of Germans (or Dutch?) sitting to my right.  They were talking quite a bit during the show.  How they were able to pull themselves away from the intensity on the stage to exchange quips with each other was beyond me.  Even the kids at the table next to them were better behaved.  When it really got to me, I turned and stared at one of them.  You know that feeling when someone from across a room is staring at you and your animal instincts kick in and you turn and look?  She felt my rage bullets hitting her on the side of her face and she turned to look at me.  I stared her right in the eyes for a good 5 seconds.  Count out 5 seconds right now so you can understand how uncomfortably long that is.  In that 5 seconds my message of, “Shut the fuck up. You’re being rude to the performers and keeping me from fully enjoying this show,” was communicated perfectly with my eyeballs!

Next was my favorite part: Paco Fernandez.  I took a few more pictures but he was mostly a blur because he was so fast.  I was mesmerized by how fast he was.  Even the German table was enraptured and completely silent. 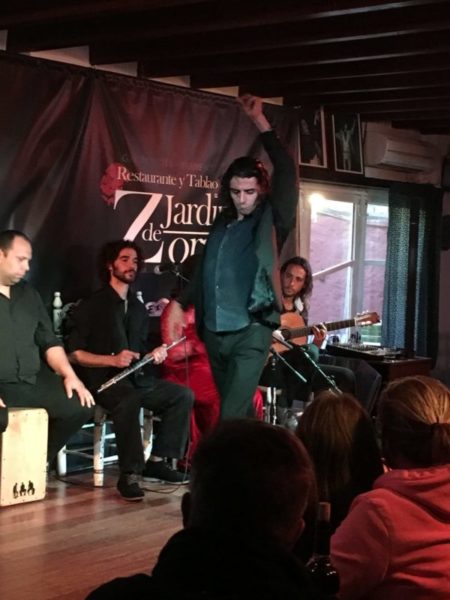 Wow.  Just wow.  He was gorgeous to watch for many reasons.  Here – see for yourself!

Let me tell you, these performers are absolutely present in the moment when they are on stage.  That’s part of what makes it so emotional and intense.  Paco, without the benefit of a dress to grab on to and swish around, uses the right or left side of his unbuttoned jacket.  He had a death grip on that jacket and he would frequently open it and close it to emphasize a move.  I was surprised that he didn’t tear it during the show.  Maybe he buys disposable jackets.  Maybe he’s dating a tailor who fixes his jackets every day.  Maybe he has custom kevlar jackets made.  I could not believe he moved so fast for so long.  And yes, ladies, he did get very sweaty.

After he sat down, the musicians took over again and OH FOR THE LOVE-A!  The GERMANS are talking AGAIN!  Ladies, remember that time when my eyeballs told you… oh right.  You didn’t understand because my cold stare was in English.  I mean… what could be so important during this marvelous and meaningful experience that you had to keep talking to one another?!  I barely took any photos or video because I really wanted to be focused on these amazing performers!  Seriously, what couldn’t wait until after the show?

Lady with large mouth:  “Oh my gosh!  If we were all on a plane and crashed in the Andes mountains I would eat him first!”

Chatty Lady:  “True, and the fear of the crashing plane would build up too much lactic acid and adrenaline in the meat.”

Thankfully, there was something that warmed my heart in the end.  When I looked over at the staff behind me, I saw that their complete attention was on the entertainers.  Even though they see a flamenco show every night of the week, they stood in a group and watched the magnificent spectacle, letting themselves be swept up in the moment.  I’m so fortunate that I got to share in that awe.