I love me some sweets.  Let’s see what Spain has to offer!

I saw this in the window of the sweet shop and I swear I saw pinon nuts speckled in it.  I was disappointed to find that they were dry bread-y, cracker-y, noodle-y things.  This wound up being more like a rice crispy treat but instead of marshmallow goo holding it together it was most likely honey. 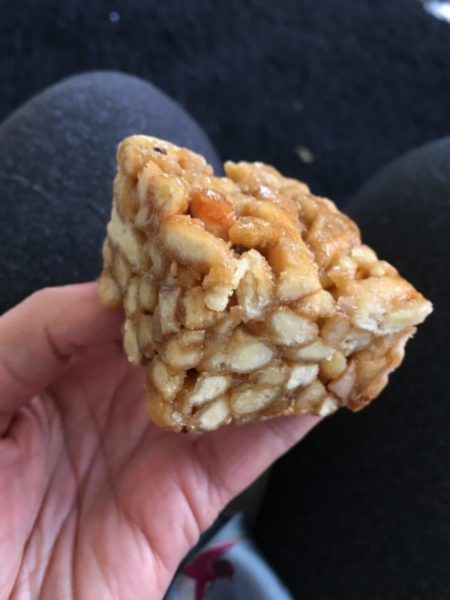 I love marzipan and I got suckered into this beautifully arranged store in a touristy area.  Got pistachio and orange.  They were both flavorful but the texture was grainy?  Sugary?  They were definitely too sweet.  (Can you believe it?) 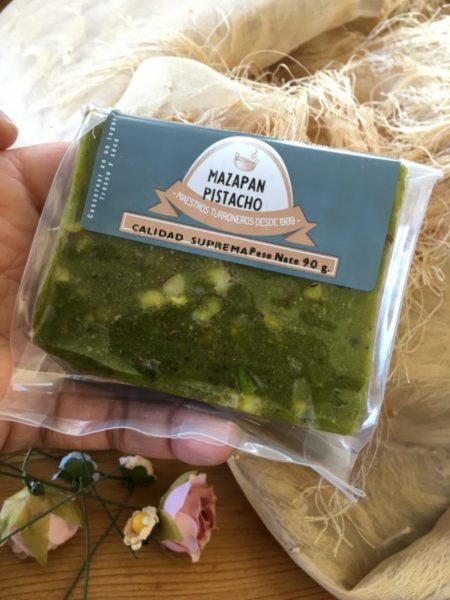 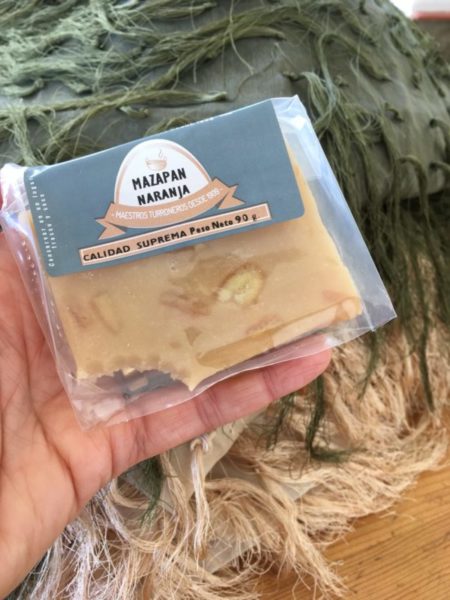 From the same store, I finally got my pinon nut fix.  These were rich.  This turron is a crunchy form of nougat.  The top and bottom of each bar had a thin, edible, wafer-like paper to keep them separated from one another.  Perhaps they are gooey when freshly made. 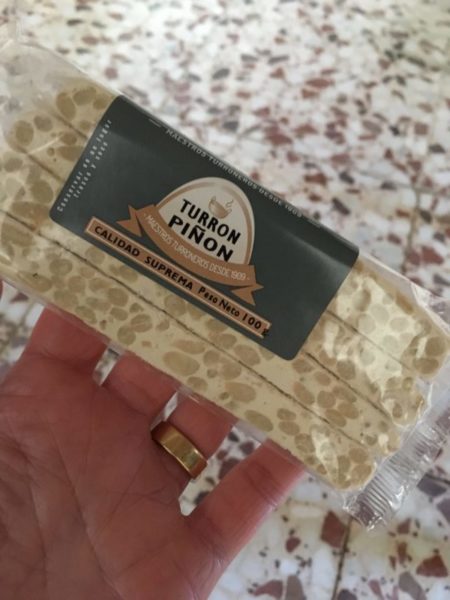 7/10  Could buy again, but could live without them.

Ok really Marie biscuits?  You have a wikipedia entry?  How did I not know about you?  I refer to these “biscuits” as “godforsaken cookies” because I can’t stop eating them.  It’s just a lightly sweet, flat cookie with some vanilla in it.  So, same flavor as a vanilla wafer?  Different thickness and texture though.  These are what tide me over when I’m waiting desperately for my 9PM Spanish dinner.  I normally eat dinner between 6 and 7 at home so to keep me from murdering a living being in the face, I’ve been consuming these cookies like… like… well fucking google should start marketing them to me any day now.  Like, they will have figured out with their little mosquito drones that collect hourly blood samples from me and upload data to evil corporations that my chemical makeup is at least 1/3 Marie “biscuit.”  By the way world: A real biscuit is a hot and savory bread-like substance that is made from flour and milk and butter and love and is usually drowned in gravy.  That’s a biscuit. 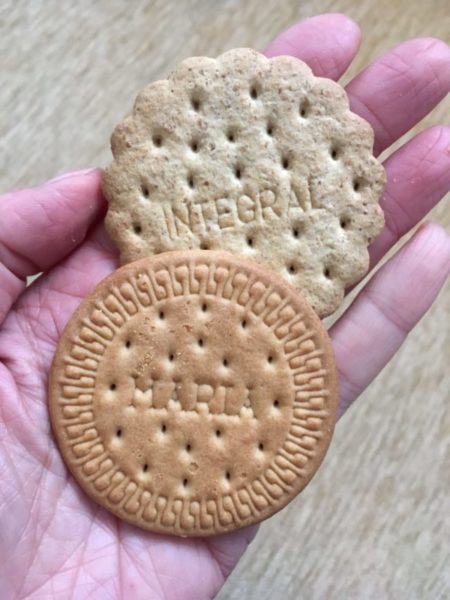 Gelato abounds here but you really gotta hunt to find good stuff.  You don’t want the stuff with artificial colors in it – you want the real stuff.  I’ve had several flavors but my favorite has been one with ricotta and fig.  Getting the right gelato will mentally sustain me for about 3 days. 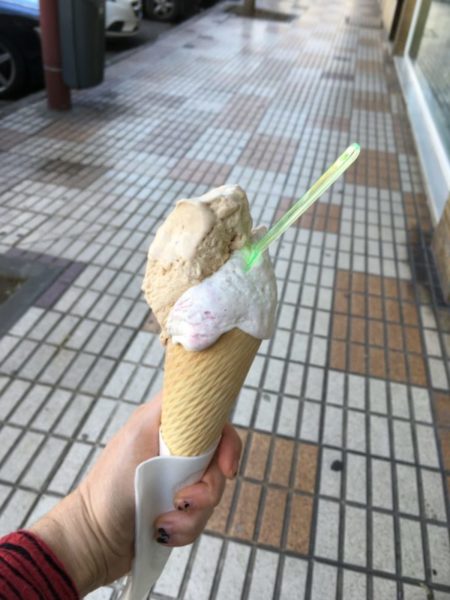 10/10  For the right gelato.  I will always buy again.  I sometimes wake up thinking about gelato.  And cats.

I bought these on a whim.  I went into this store looking for a sandwich and wound up with cookies.  Ok see – these weird things are happening out here.  ONE – they have siesta which means everything closes in the afternoon from about 2 to 5.  TWO – I’ve gotten weird about buying food.  For example, on this day, I was thinking I’d get some tapas in town but it was Good Friday and the Semana Santa frenzy was still happening.  The town of Castilblanco was crowded with people.  People everywhere and the place is tiny.  They’re so tiny they don’t even have a real wikipedia page.  I enjoy going into a half empty cafe where there is no pressure on me to order quickly but that wasn’t possible on this day.  I stood in front of many counters looking at the menu and just opted to leave because there was too much pressure and noise and people.  Later in this little grocery store, still hungry for lunch, I was pressured by people waiting to buy things behind me and the clerk literally pulling the garage door thingy down while I was in there.  I grabbed some chips and pointed at these cookies and said, “azucar?” which means “sugar?” (I had no time to even open my translator and type a full sentence.)  She indicated that they were sweet and I bought them.  It turns out I bought a concoction of lard, flour, sugar, anise, and cinnamon called “tortas polvorones.”  Not bad.  Also not a sandwich. 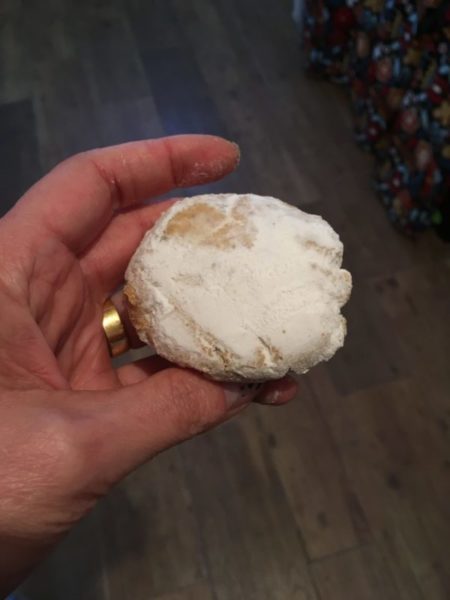 6/10  Will buy a sandwich instead next time.

Churros are a big deal out here.  Fun fact:  They are not sweet.  This was a surprise.  It was made fresh in front of my eyes with a similar set up to the image below.  Dough is extruded through the thingy and then swirled into a spiral with the sticks and quickly deep fried.  I ordered one and paid 1.50 euros.  I was not offered any cinnamon, sugar, or chocolate and I didn’t think to ask because I assumed it was sweet.  I ate some of it because I was starving (the eating schedule just doesn’t match up with mine) but saved most of it to jab into some sugar when I got home.  It was good, but I’m done.  I can scratch that one off my list.  It’s fried dough for crying out loud.  I don’t even eat doughnuts at home so… there’s that. 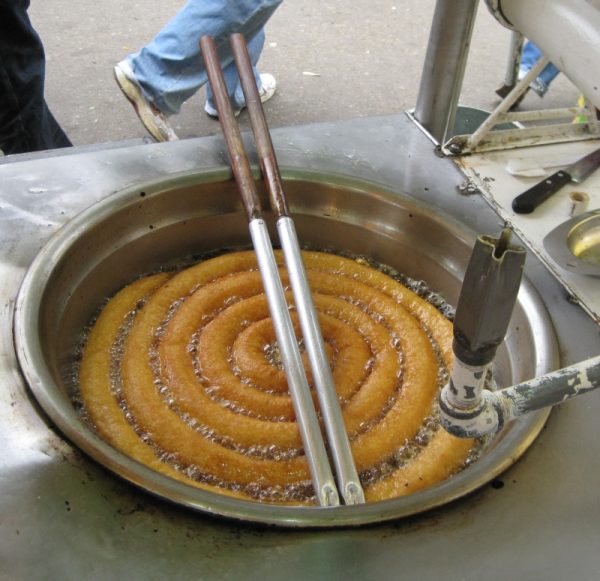 Torrijas and torrija rellena de crema are sweets that are traditionally made around Easter.  Translate this simply to “French toast” and “two pieces of French toast with custard in between the two pieces of French toast.”  The only difference being that they are soaked also in a little white or red wine.  Also douse them in a watered down honey.  They’re ok.  I had some in Seville but the ones I will remember are the ones made by Martina’s neighbor, Rafaella.  Rafaella is this little old lady across the street.  When she comes over to Martina’s house she stands at the locked gate and yells her name until she is heard.  To us it sounded like a high-pitched, “MAAAAH!” or “maaaah!” depending on how noisy it was in the house.  We enjoyed making this sound multiple times in the following days.  We refer to it as “el llanto del vecino” or “the cry of the neighbor” in the midst of sounds made by dogs, chickens, peacocks, donkeys, and sheep….  MAAAAH!  Anyway, I didn’t get a picture and I’m not going to dig around the internet for a picture of French toast.  We all know what that looks like.  8/10 on Rafaella’s torrijas, but will probably never have the pleasure again.

Pestinos are also an Easter treat.  They were described to me as “Spanish baklava” since they were made with phyllo dough.  I saw some in a few shop windows and I was really not impressed visually so I didn’t buy them.  Later when I was stuck in Seville for a few nights and wound up experiencing the first night of Semana Santa, I caved and grabbed a pack for the small group that accumulated at the apartment for the spectacle.  They were… pretty good actually.  They have similar ingredients to the polvorones and torrijas: wine, lard, flour, sugar, anise, cinnamon, orange zest, and honey.

7/10  Might not buy again but would eat if they were put in front of me.

Tocinillo de cielo was a mystery when I saw it offered as a gelato flavor.  I looked it up on my translator and I got, “Pork of the sky.”  Ok.  Sign me up.  But I was confused.  What I saw before me was not bacon flecked ice cream but something that looked like flan.  Yeah so, it turns out it’s a lot like flan.  And uh, flan is a custard.  Yeah, and… custard is made of eggs.  Eggs come from chickens.  (Well I suppose they come from snakes and fish too, but gross.)  And chickens are not pigs.  Therefore, no idea why we’re looking at a custard called “sky pork” but I’m gonna eat it.  Actually, I think I had some in Madrid but there was no name in front of it at the sweet shop.  I just pointed at it and said “uno.”  It was delicious. 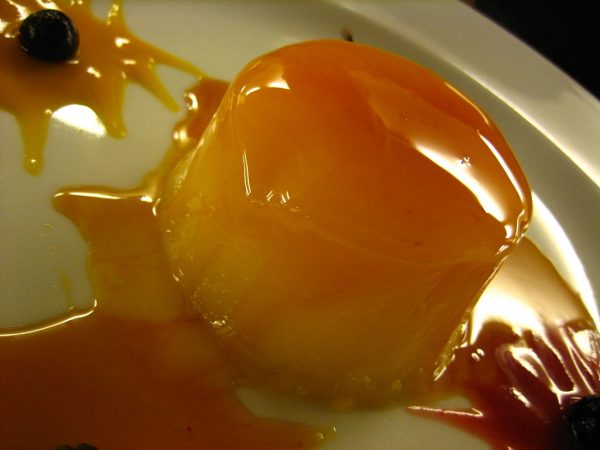 So, gelato narrowly wins this thing so far, closely followed by sky pork.  (new euphamism for the mile high club!)  Sky pork gelato (…eeeeeeeewww) actually becomes a divine combination that scores an 11.  This post has a lot of words in it.  Thank you for reading my words.