Citrus trees grow like weeds out here and there’s a lemon tree in the front yard.  One of the Help X tasks is to prune the tree.  After careful research on lemon tree pruning, it was found that all of the lemons had to be picked first.  Now, all of these lemons could have simply been sold to the grocery store but the NZ’s weren’t having it.  Thus, March 13th was officially declared Lemon Day… and then Lemon Day got moved to the 14th.  And then another Lemon Day happened on the 15th.  As we suspected, it’s more accurate to call this Lemon Week, and nothing is better than Lemon Week.  Lemon Week activities will continue with a second grand rendering of lemon marmalade.  A second?  Yes, let me show you the first.  BUT, before that is the lemon preserving process… 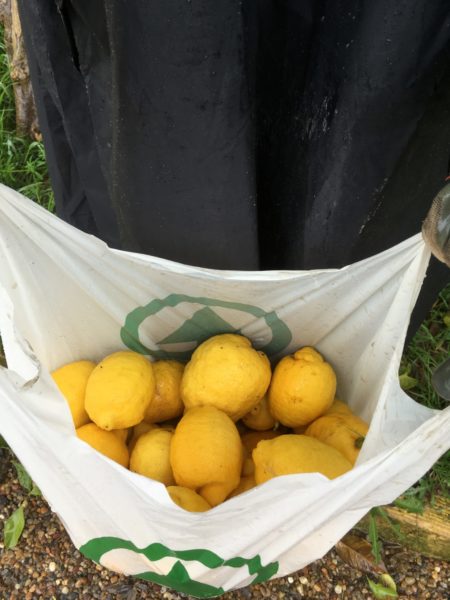 A small portion of what was picked. 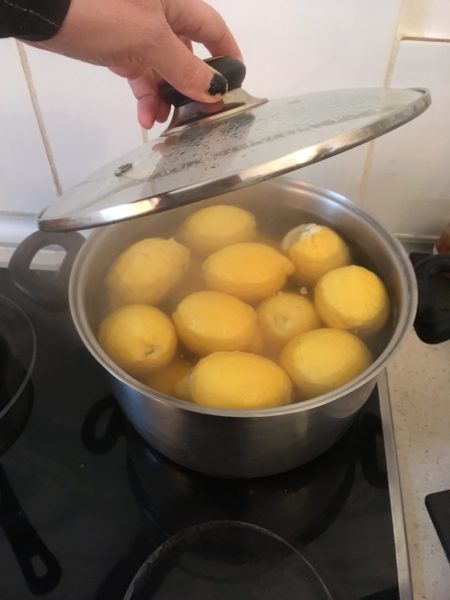 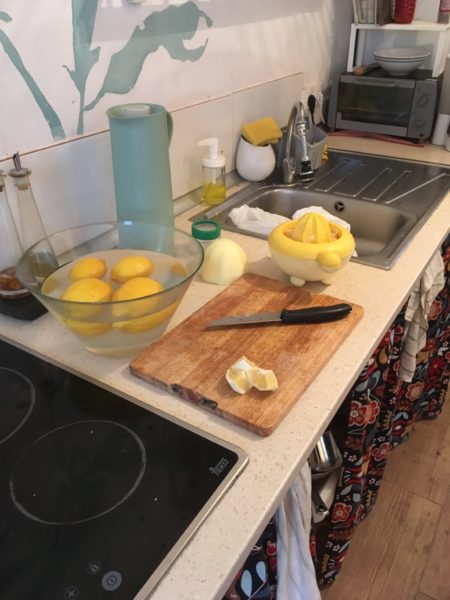 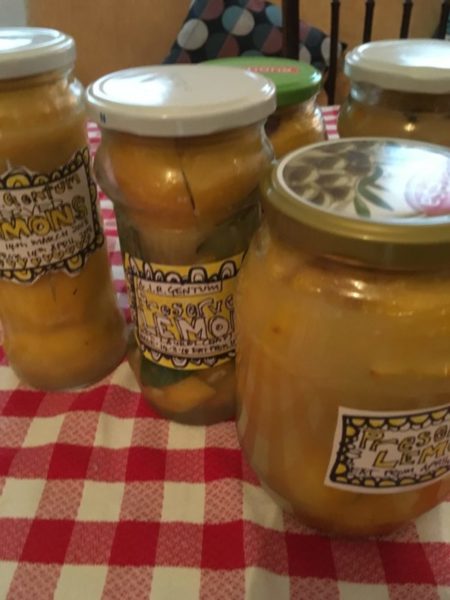 Lemons stored with peppercorns, some sort of flavorful leaf and various and sundry other flavors.  Preserved lemons are for Greek and Moroccan dishes. 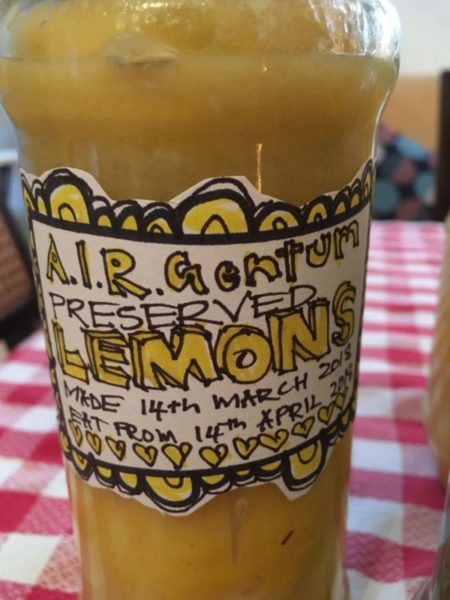 Hand drawn labels created by the NZ’s with joy and care. 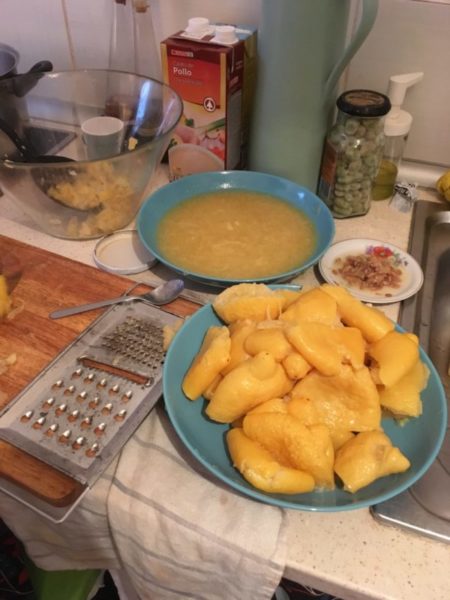 Marmalade process.  The whole lemon is used.  Even the pips! 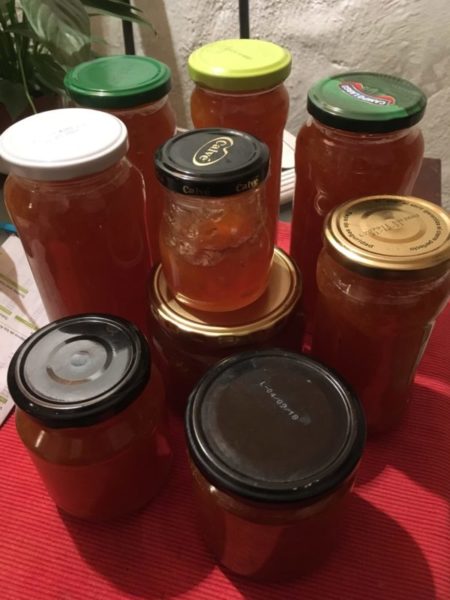 Round one of the yield. 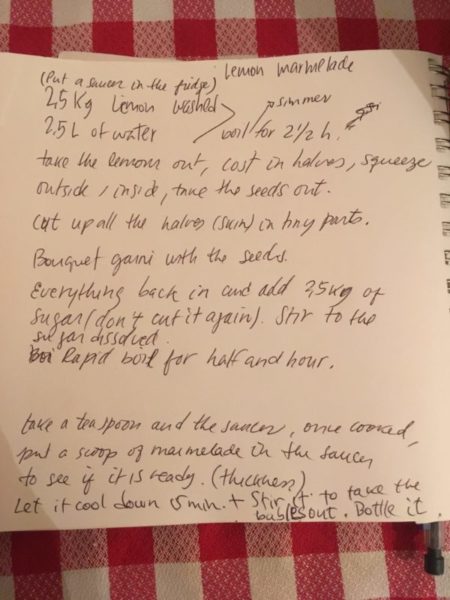 BONUS!  The recipe!  Scribed by Sonia.  If you want to do this, make sure you use organic lemons. 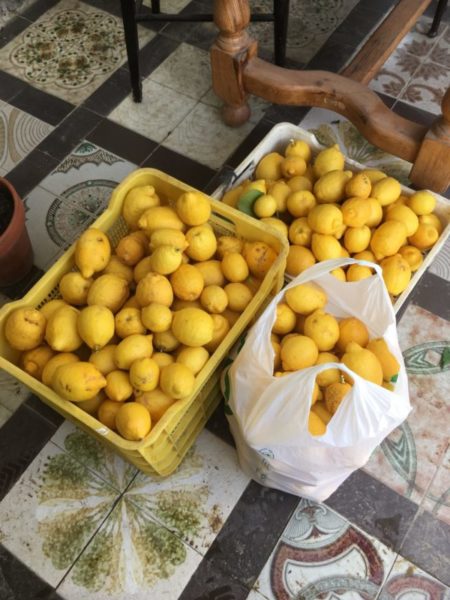 This is in addition to the earlier bag, plus there was another bag and carton. 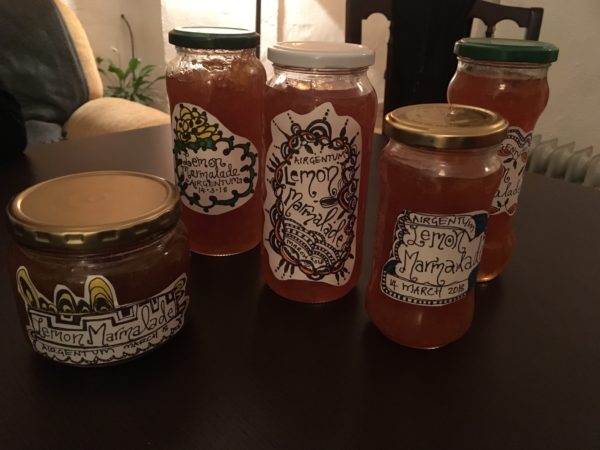 More spectacular labels by the NZ’s.

Notice that the number of jars has decreased dramatically from the pic of the yield to the pic of the jars with labels.  That’s because they’re been given away to neighbors who have been coming over with treats for us.  One lovely abuela, Rafaella, came over with some flan filled cinnamon toast.  When she was offered a jar of marmalade, she actually performed a little dance.  We now have an official Lemon Week dance!

The texture of the marmalade is perfect, and the flavor is to die for.  My only experience with marmalade before this was when I was about 11 years old.  I tried orange marmalade and hated it.  My taste buds have matured and I’m way more open to trying new foods now so I was really looking forward to this.  We’ve been eating it with cheese on bread.  I plan to continue doing so when I get home!