I’m going to organize the photos into categories.  Right now I’ve got topics like fashion, e-fashion, vehicles, recycling, ceramics, textures, wood, buildings, robots, and furniture floating to the surface as I flip through what seems like miles of digital information.  However, what I’d like to do first is talk about two artists to whom I spoke.  I followed a semi-casual protocol when taking photos of artwork.  If it was posted not to take photos I didn’t take any, of course.  If an artist doesn’t want something they made or designed photographed then I totally understand and will respect that.  It’s not like it was a table full of sunglasses at a flea market or a thrift store for chrissakes.  (What I mean is…  if it’s a thrift store full of crap and a line of cheap production glasses, I’m going to sneak some fucking photos.)  Otherwise I took photos.  One exception was that if I could clearly see the artist standing there and paying attention to me, I would ask if it’s ok to take a photo.  Most people happily gave me permission, either not caring what I did with the images or trusting me implicitly.  I mean… I do have that Gandhi vibe that emanates from me about 10 feet in any direction.  Just ask my students!  /sarcasm

Ok, ok, to the point.  Two artists asked me to tag them on instagram.  No ragrets (sorry that’s never gonna get old for me), I do not have an instagram account because it’s a… (dry heave, dry heave) facebook product.  (New readers – I have ethical and privacy issues with facebook as a company and threaten to quit it every damn day… but you know… shameless self promotion…)  When I told them as much, they inquired as to why I’d be taking photos at all.  HAH!  Why did people ever take photos of stuff they thought was cool before instagram came around?  No idea.  Millennials.  SO, I told them I have a blog and that I’d write about it but that I had a metric shit-ton of images to work through and therefore had no idea as to when I’d post about them.  That just didn’t sit right with me, so here they are.  There’s a code of honor to be followed.

First up is Louis Armand Bos.  (Ah crap, his site isn’t working, but please see his work on instagram at Louisbos_design and tell him I sent you.)  I stood back to get a shot of these tables when Louis approached me and started speaking in Dutch.  I always feel bad when I can’t reply in the native language.  Sometimes people go on for quite some time while I stare at them wide-eyed.  I don’t know what’s more rude, interrupting them or just waiting and saying, “I’m sorry, English?” at the end of their earnest communication.  I chose the latter and Louis invited me to touch the tables. 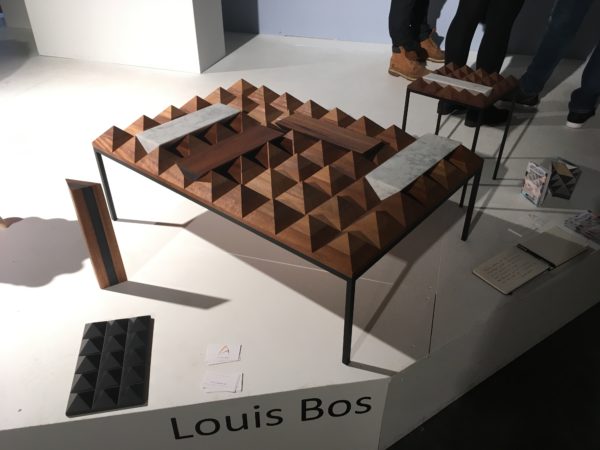 Precision cut pyramids are set up in a grid on a fabricated steel frame.

The next best part is the way those elongated triangle slabs fit into the V’s of the table.  They slide back and forth like buttah and can be placed wherever you like.  This turns the art object into a functioning table.  Really cool Louis.  Thank you for sharing.

Next is Remy Van Zandbergen. 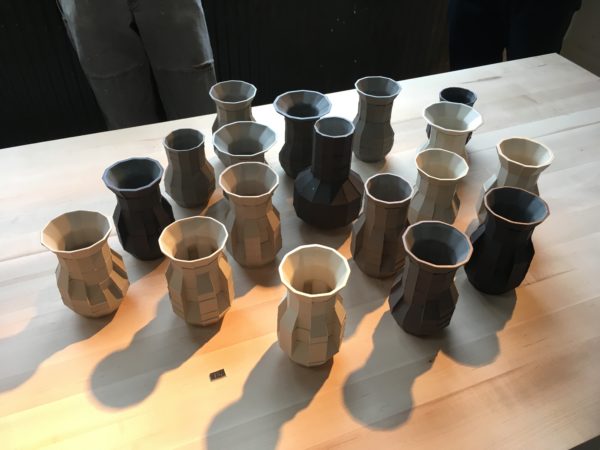 Remy’s enviable studio was crowded when I popped by the first time but what I saw made me want to come back.  These are his ceramic vases and it’s the only picture I took in the studio.  I do regret not taking more images and learning more about his process but I got sidetracked when talking to Remy about purchasing something I couldn’t live without. 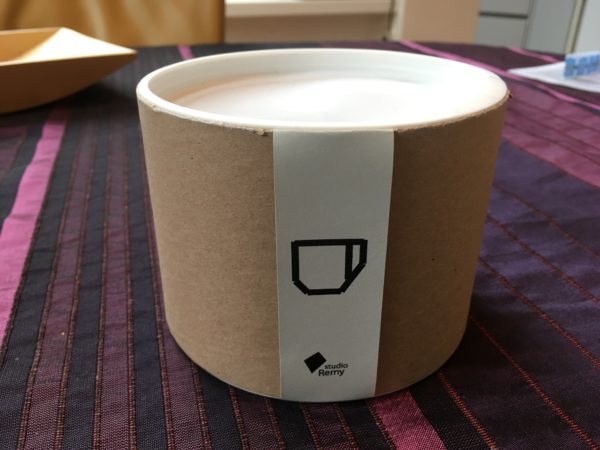 The packaging.  It’s gotta make it back to Texas with me.

Let me just say here that I’m on a tight budget.  I’m only getting half of my salary while on sabbatical leave.  Even with my full salary the “things that I couldn’t live without” would have to be pretty ground-shatteringly amazing because I’m pretty frugal.  However, If I had all the money in the world I’d be dressed in some of the craziest fashion I’ve seen in the past couple of days.  Some examples: 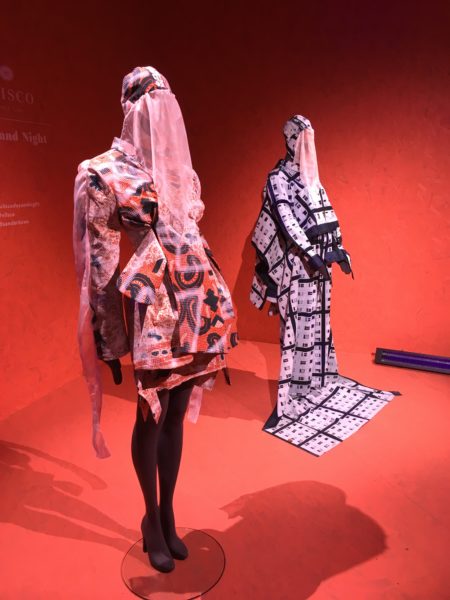 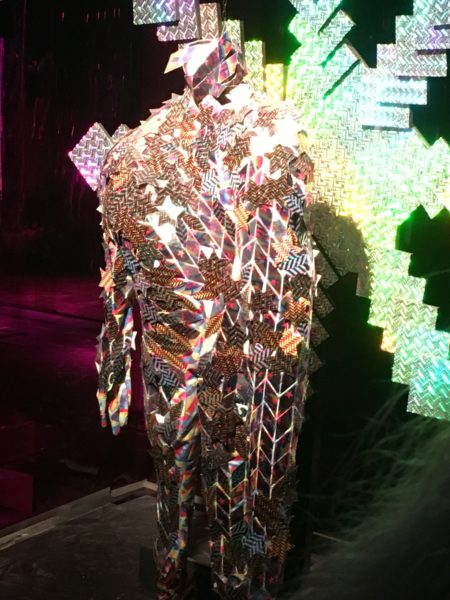 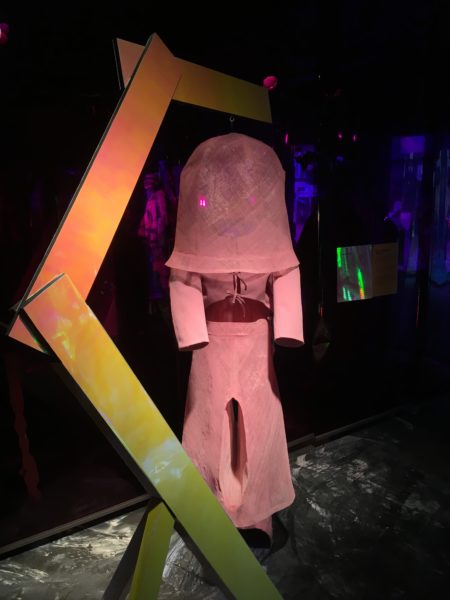 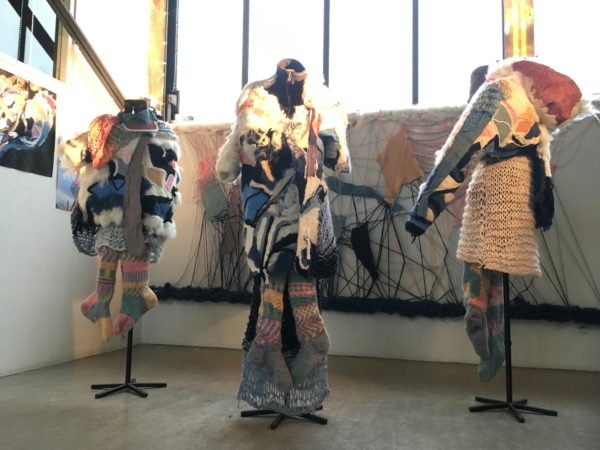 More about the fashion designers in another post.  Stay tuned!

That’s right.  I’d be the anonymous Lady Gaga.  I have no desire to actually be identified in these works of art.  I only want to wear them.  All the time.  (I may have just discovered a fetish.) 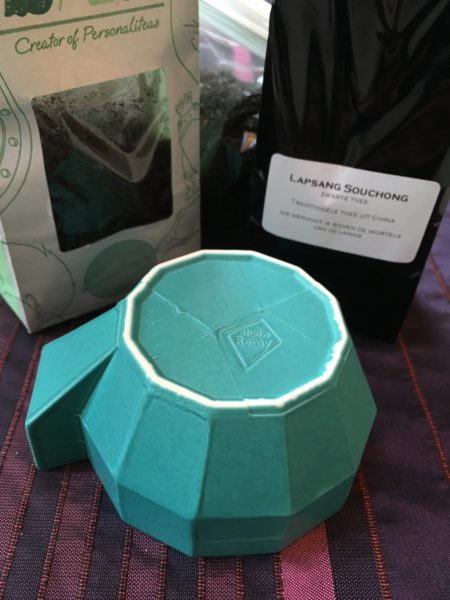 Here is the bottom of the cup with Remy’s maker’s mark.  A lovely one, I might add.  In the background is all of the tea that’s going to get consumed in this beautiful vessel. 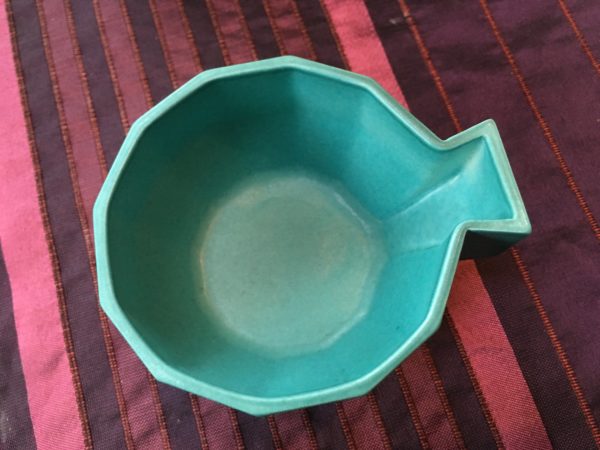 The shape of the rim.

I should mention that this is the only piece of art I bought during #DDW17.  That’s saying a lot about this purchase.  Kinda looks like the lower half of a grenade, doesn’t it?  Just now noticing that. 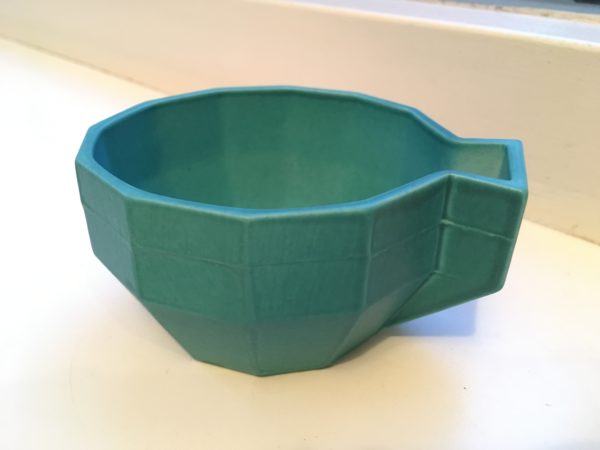 The pretty cup.  Mine!

I had to possess this teacup as my own.  One of the pictures I missed taking was a table full of angled forms that somehow play a role in the making of this geometric series.  I did get to learn a little more about the artist though!  After we talked for a while, Remy mentioned a drawing that he spent 3 months on.  My eyes lit up and he asked if I’d like to see it.  I think my answer was “heck yeah!”  We walked up some stairs to the second floor mezzanine where another room and a kitchen were.  (Shit, I just realized I went upstairs to see his drawings.  Ryder, I totally did not go “upstairs to see his drawings.”)  Annnnnnd I didn’t take a photo of the drawing either.  Thankfully, if you click on his website above you can see it.

At once I realized why I was so attracted to the teacup and other ceramics in his studio: I recognized something of his work in my work.  The drawing along with the ceramic work and (bonus) stop-motion work he’s done are all meticulous and obsessive.  He talked about how relaxing it was to draw the city for three months.  Yep.  I know that feeling.  Not gonna make this about me though.  Go look at Remy’s site.  And Remy, I have no right to hound you into updating your site with your new work because I’m so bad at updating mine… but the world needs to see your recent work.  It’s awesome.