Before I travel anywhere I research the crap out of the place.  This was painfully true for Japan.  I looked into everything I was interested in and learned about things I didn’t know existed.  I am following several Japanese subreddits including r/japan, r/japantravel, r/japanlife and r/tokyo.  I found a series about Japanese culture on netflix called “Japanese Style Originator” and binge-watched it.  No ragrets.  Not even a letter.  I surfed the web and followed links down into the Marianas Trench of information.  It was dark down there.

I read for hours and hours turned into days.  Here’s my findings so far!

Truth or myth:  Japanese people are going to LOVE you.  Myth!
They don’t dislike me though!  Well, most of them don’t.  There are some, like in any country, who don’t trust or like foreigners.  There are many who don’t respond when I cheerfully greet them with, “Konichiwa!” (That means, “Good afternoon.”)  shrug  Not taking it personally.  But I certainly don’t find them staring at me like I’m a rare flower and they aren’t running up to me to take my picture.  They just don’t care as much as I was told they would.  It’s not like they are so disconnected from the rest of the world that they’ve never seen a tall-ish, pasty white woman with fake red hair before.  I’m thankful not to be getting that kind of attention.

Truth or myth:  You are going to be a whole head taller than they are!  Myth!
C’mon.  While I wouldn’t exactly say I fit in, I didn’t really stand out all that much either.  Though, I should say 90% of the people I saw are extremely thin.  I didn’t bother trying on clothes anywhere because I had been told that even the large sizes wouldn’t fit me.  Maybe I should at least give it a try, but so far I didn’t find anything I couldn’t live without in the clothing category. 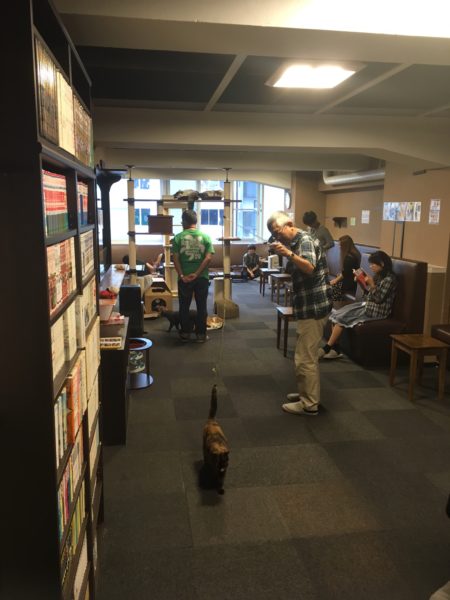 The cat cafe.  OF COURSE I went to a cat cafe.

Truth or myth:  There are no “public” trashcans in Japan and you’ll have to tote your trash around. Totally true.  I didn’t accumulate a bunch of trash though.

Truth or myth:  There’s sushi everywhere and it is amazing.  GLORIOUSLY TRUE.  I just had 6 slices of tuna sashimi for breakfast.  It was 4 dollars at the grocery store.  I am told there’s a sweet spot every evening where all of the day’s sushi is marked half-price.  There’s usually a swarm of people following the shop clerk with the sticker gun around and they descend on the sushi like seagulls before the sticker has fully clung to the package.  Poor guy has to carry a stun gun. 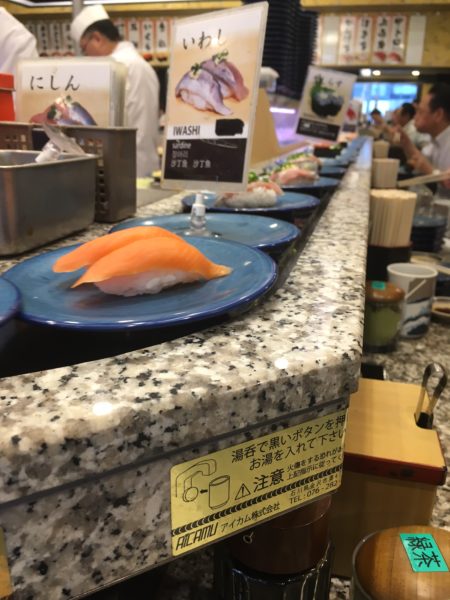 Truth or myth:  You’re gonna get felt up on a train by a lecherous Japanese man.  Myth.  Thank goodness.  I was preparing myself by learning the Japanese phrase for “This man just felt me up! Will someone please cut off his hand and feed it to him?  Thank you very much!”  (Politeness in Japan is a must!)  Unfortunately for small Japanese girls, this pretty much only happens to small Japanese girls.  Yeah, it’s gross.

Truth or myth:  You’re going to be squeezed on a train like a sardine.  Myth.  Though to be fair, I wasn’t on the train in the busiest part of Tokyo at the busiest time of the day.

Truth or myth:  Japanese people will go out of their way to help a lost tourist.  Holy shit.  They aren’t kidding.  TRUTH a thousand times over.  Twice I’ve had two complete strangers go above and beyond in assisting me.  You see, the train stations are incredibly intimidating.  There is very minimal English on the boards telling you where to go.  Shibuya station?  That place had to be designed by a drunk Japanese raccoon, easily distracted by shiny things or sake.  Trains everywhere. 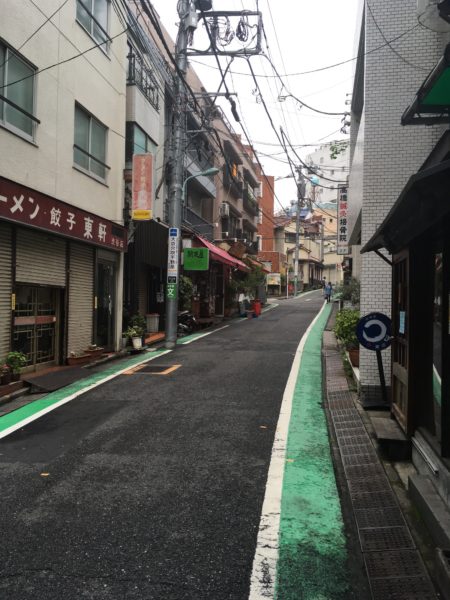 The quiet Shibuya neighborhood my hotel was in.

The first guy who helped me saw me at Shibuya station checking my map and simply trying to exit the station to the street.  I saw exit signs and followed them but they only led me to more trains.  (I had no internet at this point or I would have been fine. My pocket wifi that I ordered was waiting for me at my hotel.)  I looked confused enough that an English speaking man stopped and asked me if I needed help.  Long story short, after searching his phone, computer, and asking the station agent, he decided to ride with me to another station.  He grabbed one of my bags and said, “Let’s go.”

You have to understand something about me here: Regardless of my actions, my mouth will tell you that I really, really, really don’t like people, much less trust a total stranger… who is male… in a foreign country.  Luckily, since I had learned through my research that Japanese people are extremely helpful to lost tourists, I had absolutely no qualms about following this guy.  And thank goodness or I would have been shouting, “This man is stealing my luggage and trying to kidnap me!  Will someone please cripple his legs?  Thank you very much!”  We got to a station closer to my hotel, and he talked to another station agent.  I recognized the word “gaijin.” (It means “outside person” or “foreigner” but I thought it had negative connotations.)  He then walked me all the way to my hotel and lightheartedly chastised me for not printing a map.  I thanked him over and over. 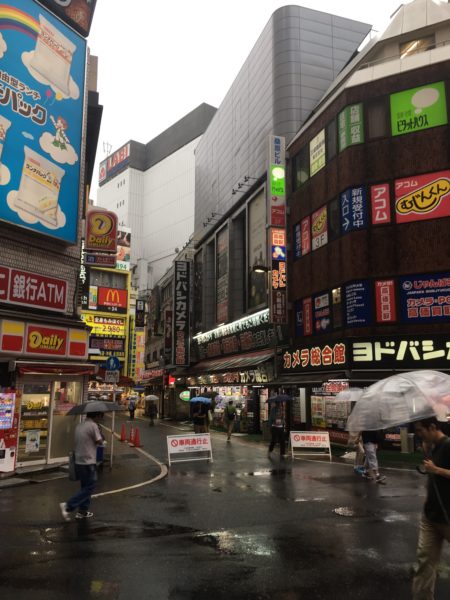 The second generous donation of time came from a man with a wife and two very small children.  Got myself back to Shibuya station and was extremely flustered trying to make it to my train on time.  I had no idea how many twists and turns I’d be taking and that the hour I gave myself to catch my 1.5 hour train to the residency was just barely sufficient.  I made it to my platform and asked the agents if I was in the right spot.  They didn’t speak any English but they ushered me to the place I needed to be.  He told me, “Fourteen.” Anxious, I hopped the next train that appeared even though there was no 14 on it anywhere.  I had heard that trains in Japan run like clockwork and my train was supposed to arrive at 11:04… but it was already 11:06.  I kinda knew I had screwed up and I asked the only people on the train car, a family of 4, if I was on the right one.  They said no and my face fell.  I got off at the next station but I was sure I’d missed my train and would have to wait another hour before the next one came.  After exiting the train I stood on the platform planning my next move.  The family had returned to me and wanted to help.  They said I still had time to catch the train I missed.  We took an elevator and popped left and right down a few corridors to a platform.  The husband said, “The next train is yours.”  Thank you, thank you, thank you.  Absolutely incredible.