Story time.  You should probably sit down.  The flea market on Sundays here is super cool and I’ve been twice now.  The first time was a reconnaissance mission though I did wind up with some cute cat things and a handful of uchiwa.  As I’ve settled into the area and met people who know things, my mission on the second visit became more critical.

Objective 1: Tools from the blacksmith

Objective 4: Paper with writing on it

Caught the bus with 3 friends from the residency at 9 am and had no idea what a successful and crazy day I’d have.  We hopped off the bus and walked roughly a kilometer to the market.  I was greeted at the second booth by the amazing craftsman/guide Tadaaki Hachisu who gave me:

He showed me all of the relevant booths I would need, and spoke to the merchants about who I was, what I needed, and why.  He even bargained a little at the blacksmith for me.  Invaluable!

The first place I went was to the merchant with the tenugui.  They weren’t the kind I had hoped for but in sorting through them I developed a love and appreciation for them.  I crouched at first, thinking I’d find what I wanted within a few minutes, but wound up settling for a more comfortable seat on the dirt for close to half an hour.  I looked at every single one of those things and left with about 30 of them.  Hachisu-san is going to make a shirt for me!  Here’s some of my faves: 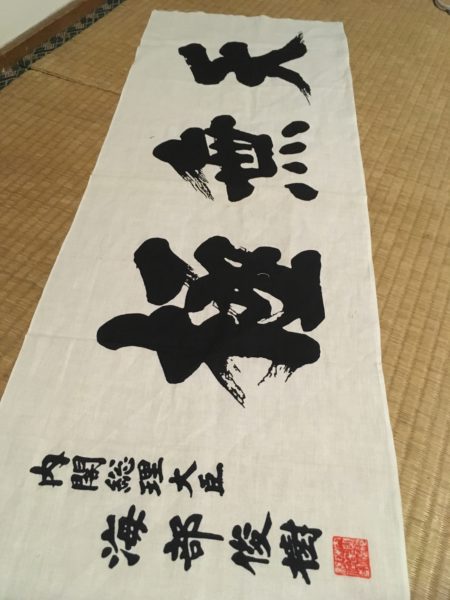 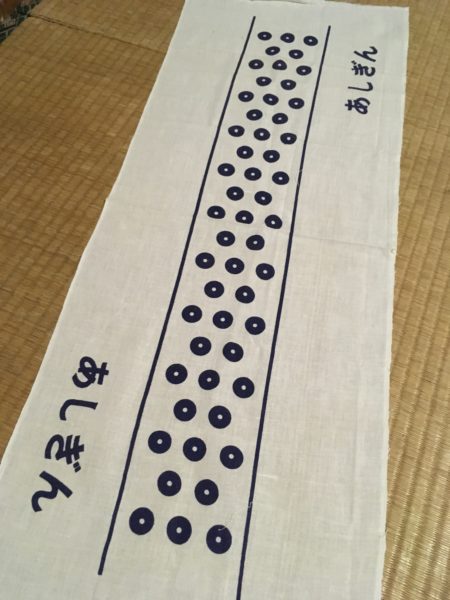 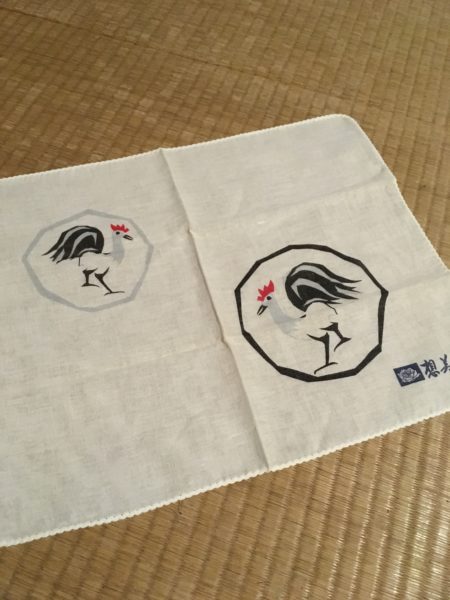 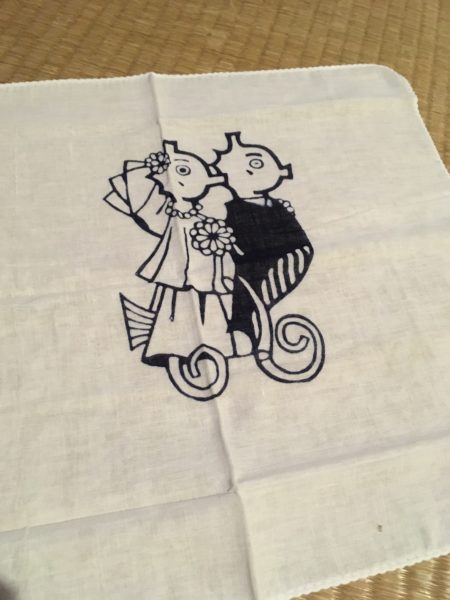 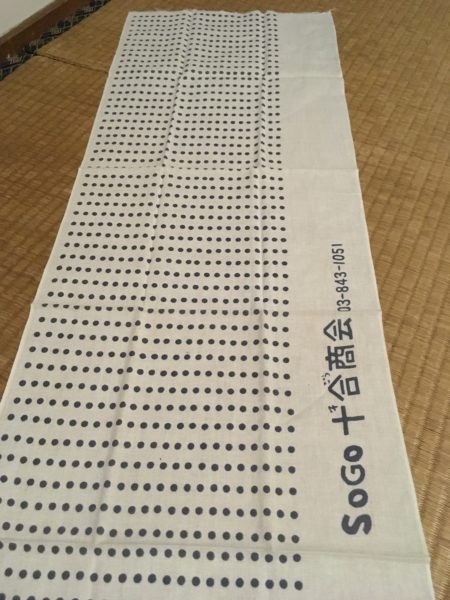 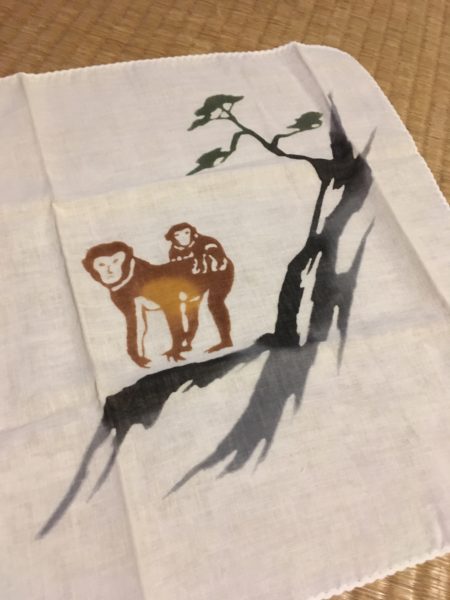 These were very affordable.  After I paid the vendor and started walking away, he chased after me and stuffed a few more in my bag!

Next was the blacksmith.  I typed into my translation app, “If I buy many things will you give me a discount?”  I read it aloud awkwardly and he smiled and said yes.  He was expensive.  Whew!  But I got some cool tools with his signature stamp on them.

This is a hand axe.  It’s for my Daddy.  He already knows that he’s getting it for Christmas so I’m posting it here freely.  I got one from a hardware store and I freaking LOVE it. 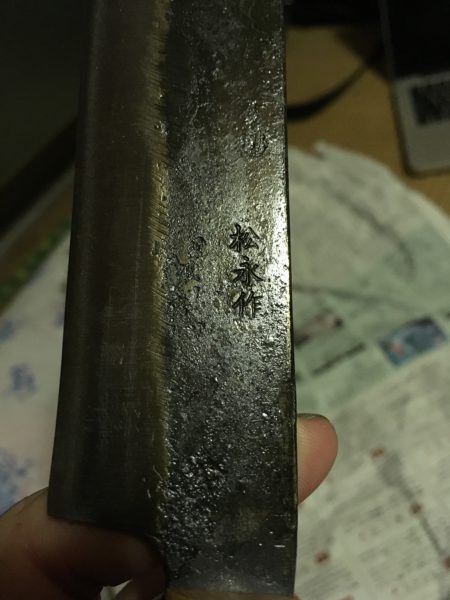 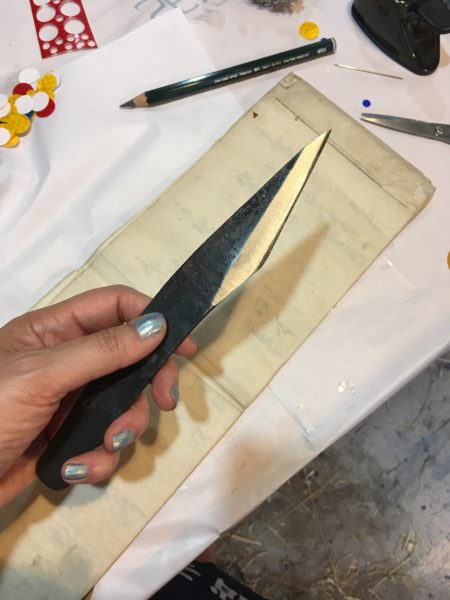 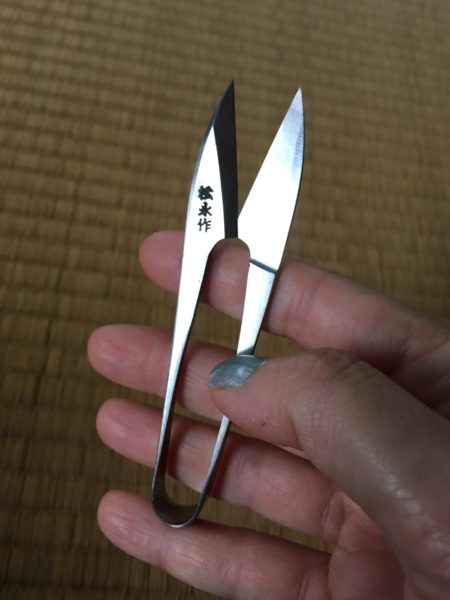 I had to have these tiny scissors.  They are beautiful.  Ryder asked what I would use them for.  Duh!  Nose hairs!  Dude, these suckers are so sharp!  I plan on injuring myself on them very soon.

Next is my work apron.  I love it. 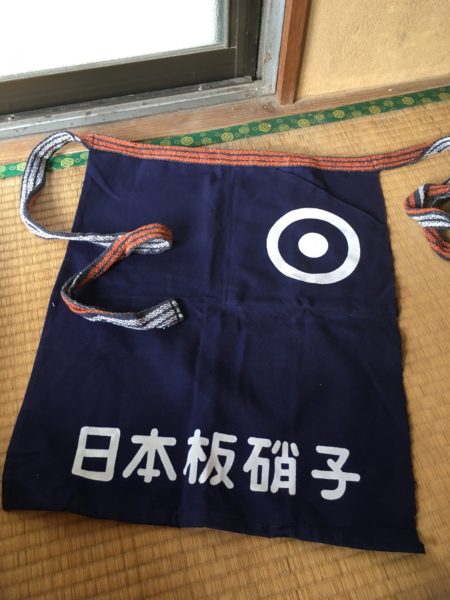 Wait till you see me wearing and holding all of these things.

NEXT is the begging of story number two.  I found a booth with antique kanzashi.  I was bewitched by the basket full of combs, sticks, and picks.  I thought that I understood the cost of one of them to be $125.00 and I was shocked but these are items that I really wanted to buy.  Turns out what I thought was a “1” was actually the yen sign.  A man standing next to me spoke to me in English and started telling me which ones were old and which ones were plastic.  He then offered to bargain the price for me. 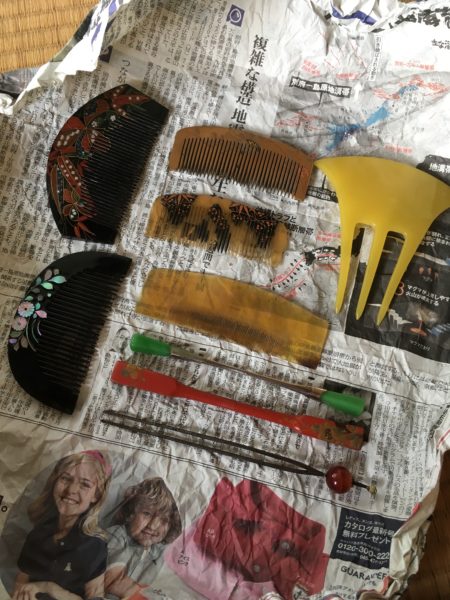 So this same guy follows me around the flea market and helped me bargain at the next two places.  He was approximately my age and he shared with me that he was a police officer.  Cool!  He then immediately said, “but not the bad kind.”  I laughed because I hadn’t thought that at all.  He explained that he was a detective specializing in guns and drugs.  I gasped!  “I know who that means you investigate,” I told him, “You have a very dangerous job!!!”  He laughed but I was impressed. 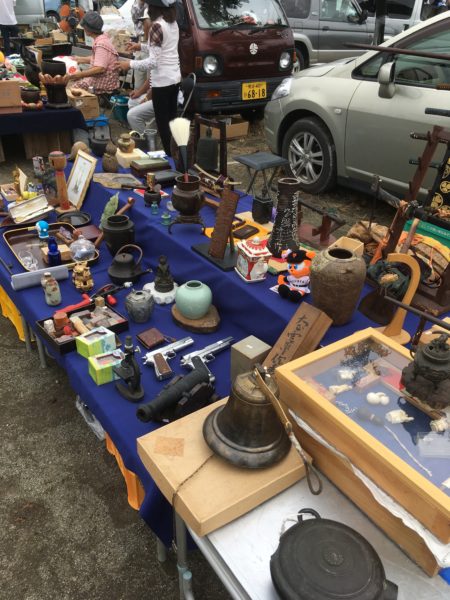 The next stop was a booth with a mishmash of things.  I was drawn by a box with more tenugui in it and grabbed a few more.  I saw a curved chisel that I needed and grabbed that along with a couple more knives.  The locals are always curious as to where I am from.  Rather than say “America” or “US” I rather enjoy saying “Texas.”  The reaction is great!  I get “Ohhhh Cowboy!” or “John Wayne!” Pow pow, pow pow! Or, “Ohhhh!  Hurricane!”  The latter response spurred on a conversation about how far Dallas is from where the hurricane hit and the detective patiently translated for me.  I’ve told many many people that Texas is the same size as Japan with half of the people.  The vendors really enjoy the conversation and this could be why I am getting gifts.  I bought tools and was given a pretty uchiwa and the tenugui that I wanted to buy. 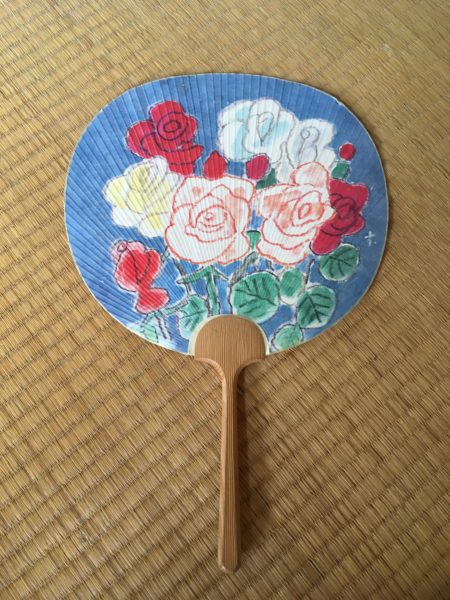 Next.  Oooooo.  Next!  I went to a book/art booth to get some old books with Japanese writing in it to tear out and put on the fans I’m making.  Tadaaki cringed when I asked if it would be looked down upon if I cut up a Buddhist scroll and he offered the old books as an alternate suggestion for paper with writing on it.  As we approached the detective said, “Oh!  This is my friend” when he saw the vendor.  The books wound up being too expensive to cut up so I got a book of some old accounting records.  That’ll make interesting reading on a fan!  “Wow, soybeans were cheap back then.  What’s this creative math here?”

I wouldn’t have looked at the art at all but the detective brought me to a stack and encouraged me to flip through.  Cool stuff!  I got this pretty woodcut print.  I have no intention of cutting these up for uchiwa.  No worries! 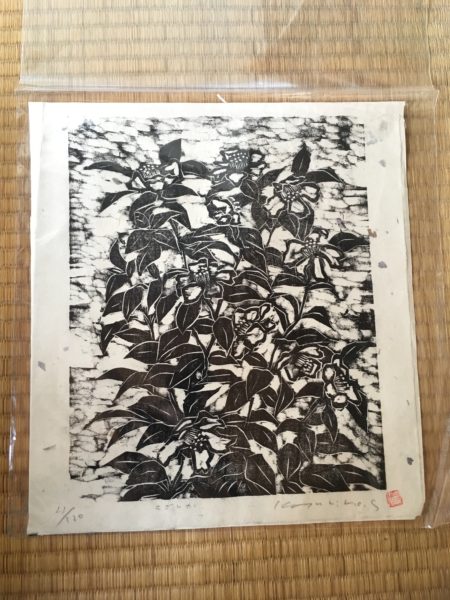 As I continued sorting through the prints I landed on a piece I couldn’t live without.  My eye is not very trained in the nuances of Asian art, so much of it looks the same to me… but this one stood out. 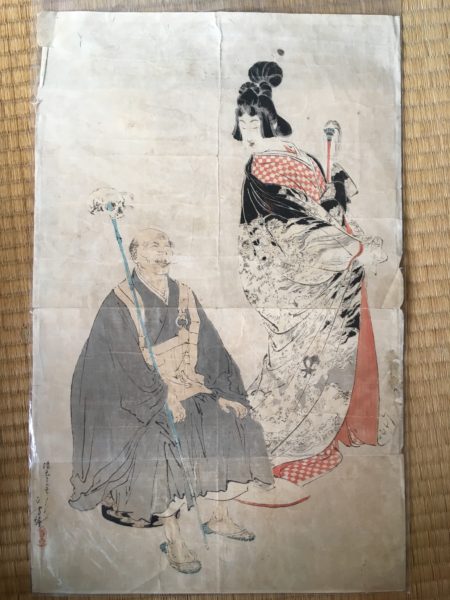 It’s a monk with a skull on a stick and a woman with demons all over her dress. His name is Ikkyu.  It’s not a gorgeous print and it’s torn and old and wrinkled, but damn it’s interesting to me.

I never got the detective’s name.  I did thank him profusely and gave him my card.  He offered to take me to my bus station and I declined because he’d already done so much for me.  I had hoped he would contact me through my site but later when I was sorting through my treasures I found my card at the bottom of the bag.  Aw.  Thank you kind detective!  Please stay safe on the job!

I raced to the bus stop in the nick of time for what google maps told me was the arrival of the next bus.  The buses run only every hour so I didn’t want to miss it.  The tea ceremony was later in the day and I wanted to have time to clean up.  No bus.  I check google and it looked like there might be another bus in 10 minutes.  Ten minutes go by.  No bus.  The weekend schedule is different so I just figured I’d have to wait an hour.  That’s fine.  I had a bottle of water and I may or may not play pokemon go to pass the time.

A car pulled around and a man asked me if I was going to Onishi.  I said yes but that I was waiting for the bus.  He offered a ride.  I froze.  1000’s of synapses regurgitated 1000’s of neurons through an electric spiderweb of brain goo… and I got in the car.  I, Sue Anne Rische, sat my butt in the car of a complete stranger… a man, no less.  Surely, by now, you all know that I neither trust nor like people very much.  I saw children’s shoes on the floorboard of the passenger seat so I figured, hey at least this guy has a kid right?  Dads aren’t murderers.  Right?  Shit ankles… what if those are the shoes of a previous victim and he’s working his way up to adults?  He spoke a little English and he pointed to the back of the car and introduced me to his son.  Pretty cute for a kid.  The guy wouldn’t murder me in front of his son, would he?

The driver’s name is Kento.  He is a carpenter.  He was wearing a button down shirt made of tenugui!  I went nuts!  He said he made it himself.  I told him what a great job he did and he pointed to a few threads sticking out of a seam at the very bottom of the shirt and insisted that he didn’t do a good job.  I brushed that off because it was a badass shirt.  I was jealous of his shirt and his sewing skills.  I started mentioning people in town and it turns out he knew Kjell (the guy running the residency), Fuyuko, (Kjell’s wife and tea master) and Tadaaki.  This provided more comfort to me and I was pretty sure by this time that I wouldn’t be sliced into a million pieces and scattered across the countryside. We continued simple conversation and I finally asked him what he was doing in Onishi.  He looked a little shy and I realized that his only business in Onishi was to drive me there.  That’s 20 minutes there and another 20 minutes back.  Sigh.  Everyone is so damn nice out here.  Thank you Kento!